Cambodia: Standing Up for Land Rights 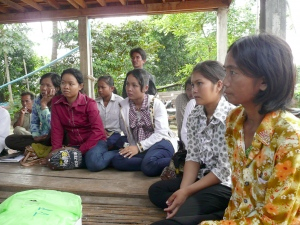 The Situation: In 2011, the Cambodian government forced thousands of villagers from their farms and livelihoods and gave the land to a private corporation.

The Impact: With the Urgent Action Fund grant, Strey Khmer held human rights trainings and community meetings for the villagers to discuss the issues they face. The activists also launched a radio program to strengthen women’s voices in the land rights movement and purchased a communication system to increase the security of activists at risk and their family members. The organization reported that the trainings enabled women to understand their rights to the land. As a result, women are spreading the information so everyone knows what their rights are. Strey Khmer reports: “After receiving training from the Strey Khmer team, women have initiated meetings with local organizations to learn about access to justice and to establish a link for future legal assistance. In addition, they have set up community meetings in order to share what they have learned from our team and other human rights organizations.”