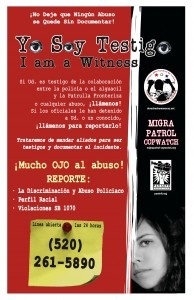 The Situation: In 2010, the State of Arizona passed Senate Bill 1070. The legislation required police officers to interrogate and detain anyone they think might be an undocumented immigrant, and criminalized legal immigrants for not carrying their papers.

Harsh immigration laws have a particularly horrific effect on women and children, since they are separated from their families and can face physical abuse by law enforcement officers. The laws also have a silencing effect, as people grow more and more afraid to speak out.

The Rapid Response: Coalición de Derechos Humanos (CDH), an organization that fights militarization of the Southern Border region and discrimination and human rights abuses by law enforcement officials, reached out to Urgent Action Fund. CDH leveraged a Rapid Response Grant to launch a “Yo Soy Testigo (I Am A Witness)” campaign, producing videos for use by teachers, churches, and community groups to help the immigrant community understand their rights in detention, domestic violence, traffic stops, housing, and schools.

The Impact: The campaign empowered community members to report law enforcement abuse and injustices and educated the community about their human and civil rights when interacting with law enforcement.