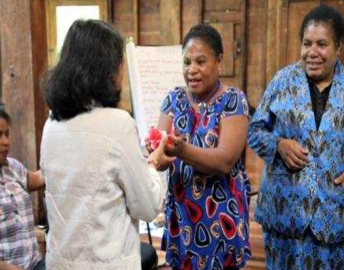 The Situation: After the fall of Suharto in 1999, a renewed conflict erupted in Indonesia that resulted in displacement and death of thousands. Special autonomy was granted to two provinces of Papua in 2001, but violence continued to escalate between security forces and local ethnic groups. In the provinces of Maluku and North Maluku, renewed religious violence broke out in September 2011. In October 2011, security forces opened fire on a people’s congress in Jayapura.

The Rapid Response: Yayasan Asian Justice and Rights (AJAR) is a human rights organization that serves as a center for learning and dialogue in the area of human rights and conflict transformation. AJAR joined other women’s organizations to produce a report documenting human rights violations against indigenous women and making recommendations for women coping with trauma. Recognizing an opportunity, AJAR requested Urgent Action Fund support to bring together women from Papua and Maluku to share their findings.

The Impact: A workshop was held with mothers/women human rights defenders to evaluate and re-strategize a gendered response to the conflict, to learn about the methodologies that integrate healing, and to document their stories. Another workshop focused on human rights and arts was held for children. The workshops will be followed by meetings with women survivors and refugees in Maluku and Papua, where AJAR will document their stories and facilitate a process for psychosocial support.