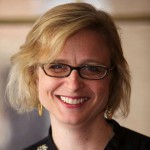 Kate was the Director of Grants at American Jewish World Service (AJWS), where she oversaw the grants AJWS makes to over 450 community‐based human rights and women’s organizations in 4 countries across Asia, Africa, and the Americas. She joined AJWS in October of 2004 to manage the grants portfolio in South Asia, which includes human rights NGOs, many of whom responded to the Indian Ocean tsunami. Kate then held the position of associate director from 2005 to 2007.

Previously, Kate was the Senior Manager of the NetAid World Schoolhouse, now an initiative of Mercy Corps, which encompassed community-based organizations focusing on women’s education in 14 countries in the Global South. Kate also spent several years in India working with local and international organizations in community development and human rights, first as an Aga Khan Foundation fellow in Rajasthan, then with Prasad Chikitsa in Maharashra. Previously, Kate worked for the Office of Population Affairs, a division of the Department of Health and Human Services, and in the House of Representatives, where she focused on U.S. foreign policy in Asia and the Pacific.

In all of her work, Kate has supported women and women’s organizations to advocate for their rights, including the right to education, economic self-sufficiency, control of their own bodies, political participation, and more.

In addition to her work at AJWS, Kate has been a Fellow at the Aspen Institute and The American Assembly’s Next Generation Project, and is a Member of the Council on Foreign Relations. Kate is fluent in both French and Hindi.