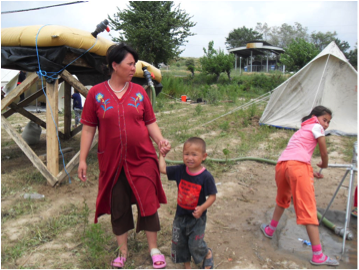 The Situation: Following the deposition of Kyrgyszstan’s President in 2010 ethnic tensions boiled over. Hundreds of people were killed, thousands more injured, and hundreds of thousands of minority Uzbeks were sent fleeing from their homes. Women and girls were raped and murdered, but the surge of violence against women was virtually ignored

The Rapid Response: The Forum of Women’s NGOs of Kyrgyzstan is a network of over 85 separate Kyrgyz NGOs committed to protecting women’s rights, promoting gender equality, and strengthening the role of local civil societies. They requested support from Urgent Action Fund to send teams of women leaders of both ethnic groups to meet with women in conflict areas and build peace.

The Impact: The Forum responded to the spate of gender-based violence in conflict areas of Kyrgyzstan via meetings with women’s NGOs, visits to conflict sites, interviews with survivors of violence and witnesses, and events aimed at emotional rehabilitation and healing. In addition to addressing the immediate needs of the women and communities impacted by the sudden escalation in violence, the Forum undertook a large data collection campaign to document cases of violence against women that occurred during the ethnic conflict. This information will be distributed to relief agencies and law enforcement bodies in order to better serve the needs of women survivors of gender-based violence and hold those who committed the violence accountable. At the conclusion of their actions, the Forum noted that “now we have a more or less full picture of the GBV and we are better organized to prevent it [in the] future.”