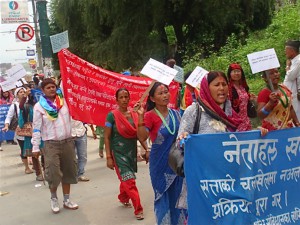 After providing shelter and protection to a survivor of domestic violence, two former UAF grantee organizations (WOREC and Mitini Nepal) are facing threats and harassment by both police and the survivor’s family members. Police have now accused the two organizations of hiding the woman from her family and have unlawfully forced their way into the offices of the organizations. Staff members have also received threatening phone calls and house visits demanding that they stop protecting the woman.

Read the action alert below from the Asian Human Rights Commission and sign an appeal letter to the authorities in Nepal condemning these threats here.

The Asian Human Rights Commission (AHRC) has received information that human rights defenders working with WOREC Nepal, a leading women’s rights organization, and Mitini Nepal, an organization working for the rights of LGBTI women, have come under threat after supporting a victim of domestic violence. Anita (name changed) filed for divorce after living through domestic violence for three years and has faced threats and attacks from her husband and her family for making this choice. The organizations and human rights defenders helping to protect her have themselves come under threat. Last week, the office of Mitini Nepal and the houses of its staff have been visited repeatedly by the police and the relatives of the victim and their director has been receiving threatening phone calls. The victim’s relatives have also forced their way into WOREC’s office, accompanied by police personnel. The AHRC is extremely concerned about Anita’s security and that of the women human rights defenders who have worked to protect her and of the apparent involvement of the police in their intimidation.