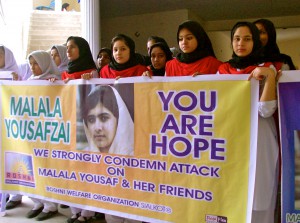 Urgent Action Fund joins human rights advocates around the world in denouncing the shooting of a 14-year-old girl in Pakistan who is a vocal promoter of girls’ education in the country.

At only 11 years old, Malala Yousufzai began writing a blog about life under the Taliban, which was published by the BBC under a pen name. She bravely chronicled the reality of living in a place where a young girl’s life is at risk simply by walking to school.

On October 9, 2012 Malala was heading home from school when Taliban militants targeted her for speaking out for girls’ education rights and shot her in the head and neck. She has been flown to the UK to receive medical attention for the bullet, which reached her skull, and remains in very critical condition. 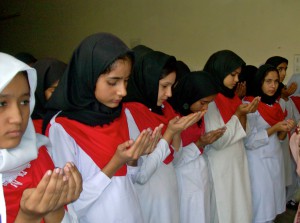 In response to the brutal attack, UAF grantee Roshni Welfare Organization (RWO) organized a rally in support of Malala, who they refer to as a “Peace Ambassador of Pakistan.” RWO’s Director Syeda Farah Azmi said, “We all are praying for her speedy recovery and hope you all will also join hands with us and condemn the brutal act of cowards.”

Since its founding in 1996, Urgent Action Fund has awarded 54 grants to women’s groups in Pakistan working on issues such as education and violence against women, and strongly believes in the power of women and girls to create peaceful social change. To read more about recent UAF grants in Pakistan, click here.

Learn more about the global reaction to Malala’s shooting from our colleagues at AWID here.