Demanding Justice for the Marshall Islands 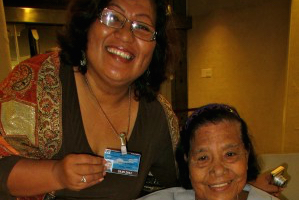 On September 13, 2012 after a journey of six days by boat, car, and plane from their home in the Marshall Islands in the Pacific Ocean, two women arrived in Geneva, Switzerland with a clear message for the UN Human Rights Council:

UAF supported the Center for Political Ecology with a grant to bring Lemeyo Abon and Abacca Anjain-Maddison to the UN in one of the last chances for the people of Marshall Islands to demand justice from the U.S. government.

This September, the UN Human Rights Council (UNHRC) reviewed the case of Marshallese people (inhabitants of the Marshall Islands) in what will be a determinant hearing on this issue. The Marshall Islands are a former territory of the United States located in the Pacific Ocean. According to U.S. records that were only declassified in 1994, “the entire Marshallese nation was exposed to measurable levels of radioactive fallout from U.S. nuclear testing” from 1946-1958. The Center for Political Ecology, which has been researching the environmental impact of the testing, notes that the total exposure yield of these nuclear tests in the Marshall Islands was equivalent to more than 7,000 Hiroshima bombs.

“We have to act now, we have to let peace prevail, this is our time for the future of our children and grandchildren. I urge this council and the members of the United Nations to take action to not only help us help ourselves, but to make sure that such miseries do not occur ever again.” – Mrs. Lemeyo Abon, Statement at UN Human Rights Council, September 13, 2012

To this day, people on the Marshall Islands are left to deal with the repercussions of these tests. This includes radiation sickness, contamination of the land and ocean, the costs of healthcare related to radiation exposure, and cleanup. The continued environmental impact of the nuclear testing and the movement of radioactive material through the food chain have been well documented and acknowledged by the U.S. government. While the U.S. has established some mechanisms for compensation, it still fails to admit responsibility for the full scope of the damage and has not paid out full damage claims to the victims.

“On March 1st, 1954, I was 14 years old, living on the island of Eneaetok on Rongelap Atoll… I was playing when the poisonous debris from the bomb fell on me. I didn’t know what it was but because it looked like snow, I began playing with it. But suddenly it burned my eyes and mouth. Later in the evening I was so sick. All the people on the island were very sick, especially the children…  – Mrs. Lemeyo Abon 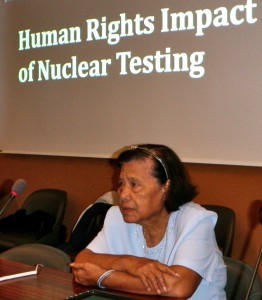 The UN Special Rapporteur for Toxics and Human Rights recently visited the Marshall Islands in 2012 and presented a report at the UNHRC meeting in September verifying the claims of damage of the Marshallese people. He stressed the importance of this hearing in September, stating that “unless a compelling case is made by civil society” at this time, ”this issue will be heard and dropped.”

Take action in solidarity with women who are demanding justice for their community. Raise awareness about this important issue by sharing this story on Facebook and Twitter, and consider making a donation to UAF in support of this type of critical work for women’s human rights.

To view a video of Lemayo speaking at the UN, click here.