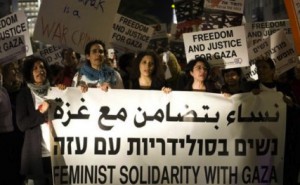 Since the most recent eruption of violence between Israel and Palestine on November 14, 2012, more than 90 Palestinians and five Israelis have been killed and over 1,000 people have been wounded, including 140 children and 83 women.

In response to this, UAF awarded two rapid response grants to women’s organizations in Palestine and Israel requesting funds to mobilize their communities in peaceful protest.

The first grant, in support of The Association of Women Committees for Social Work (AWCSW) in Ramallah, will be used to organize a Solidarity March on Thursday, November 22nd.

“Every day no peaceful action is taken is a day that breeds violent actions.”  – AWCSW Palestine

The march, to be held in Ramallah, seeks to mobilize thousands of women activists and children from rural communities in Palestine to participate in a rally in solidarity with women and their families. During the march, AWCSW will mobilize support for children with war-related trauma and release hundreds of black balloons in memory of each Palestinian killed during this conflict. As AWCSW stated, “Many of us have family in the Gaza Strip. The TV overwhelms us and our children with devastating images that we wish we could erase.  Our brothers and sisters in Gaza need national and international solidarity and support today more than ever before.”

The second grant, in support of the Coalition of Women for Peace, will be used to organize peaceful demonstrations in Israel and launch an international media campaign to end the violence. CWP is an Israeli non-profit and leading feminist voice that seeks to end the occupation of Gaza and the West Bank and to contribute to a just peace between Israelis and Palestinians, with a special emphasis on the role of women as actors for social and political change.

As part of this work, CWP will mobilize its international network of peace, human rights and feminist activists to pressure the Israeli government to cease its military actions.

“In such situations, women are even more silenced and excluded from the public sphere… Our actions call attention to the impact of military violence on civilians and strengthen women’s leadership for peace.” – CWP Israel

Urgent Action Fund stands in solidarity with its sisters in Palestine and Israel, and will continue to respond to urgent requests from women during this crisis. Since its founding in 1997, UAF has awarded more than 328 grants in response to situations of escalating violence in 58 countries around the world. To donate towards UAF’s rapid response to the crisis in the Middle East, click here.