Standing Up For Equality in Georgia 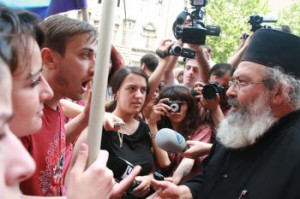 Activists are confronted by religious fundamentalists during IDAHO demonstration in Tbilisi, Georgia

LGBTQI activist organization Identoba encountered a wave of harassment from extremist and fundamentalist groups in its home country of Georgia for its participation in the International Day Against Homophobia and Transphobia (IDAHO) on May 17, 2012.

On the day of the event, violence erupted as religious extremists confronted protestors, leading to physical and verbal abuse, as well as the arrest of several activists by government security forces.

Days after the IDAHO violence, the Georgian parliament presented a legal draft to introduce laws to criminalize homosexuality. The increasingly hostile, homophobic environment led to a rise in threats towards Identoba’s staff and clients, their posters and materials were torn up, and neighbors in their building threatened them and attempted to force their way in the office. Without a safe alternative, Identoba closed its office. 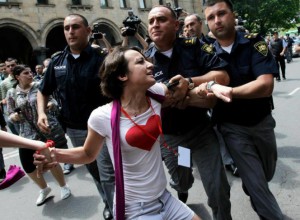 A LGBT activist is detained by police at IDAHO demonstration

Determined to maintain a safe space for LGBTQI activists, Identoba requested support from Urgent Action Fund to relocate their offices to a more secure building. In less than a week, Identoba received a $5,000 rapid response grant from UAF to temporarily cover rental costs of a new space.

Once at a new and secure office, Identoba resumed its important work to promote LGBTQI rights in a safe setting and expanded its range of services to the LGBTQI community in Georgia. For example, Identoba gave office space and institutional support for the creation of the first trans organization in Georgia – “Trans Georgia”, and organized campaign meetings for the election of a groundbreaking public official who publically supports LGBT rights. In addition, Identoba helped a radical feminist group shoot a video addressing sexism. Check out their video here.

This grant has allowed us to enlarge the scope and coverage to reach out to women, especially queer women… Since then, we have offered the space to various LGBT artists to host their exhibitions, to feminist activists to host lectures and public talks, to women’s organizations to host their events, and Identoba’s staff has organized a series of workshops and trainings for the community members in rights, activism, well-being and sexual health. 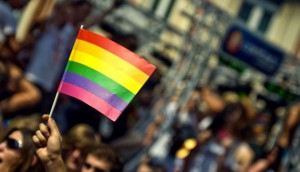 Identoba is a non-profit organization that conducts research and engages with the LGBTQI community on empowerment, training, advocacy, lobbying, awareness raising, peer education, media work and the promotion of healthy sexual lifestyles.