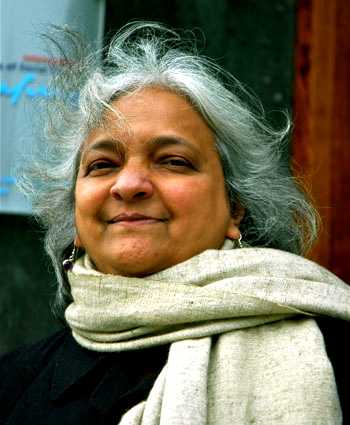 We are thrilled to announce that former UAF board chair, Sunila Abeysekera, is the first-ever recipient of the Didi Nirmala Deshpande South Asian Peace and Justice Award for her work as a leading women’s human rights defender in Sri Lanka and South Asia, and a major player in the global women’s movement.

The award, sponsored by Pakistan Institute of Labour Education and Research (PILER), is in memory of Didi Nimrmala Deshpande, a crusader for peace and friendship between Pakistan and India.

Following in Didi’s footsteps, Sunila has lived a courageous life on the forefront of many social movements, fighting relentlessly for justice and human rights–for women and on behalf of all those who experience identity-based discrimination, persecution and marginalization. She has nurtured and supported countless women and men of all ages the world over, inspiring many to challenge abusive authority at the local, national and international levels. Her work has been recognized through many awards, including UN Human Rights Prize from Kofi Annan and the 2008 Human Rights Defender Award from Human Rights Watch.

Sunila is currently living in the Netherlands, as the recipient of a Scholars At Risk fellowship, following her work highlighting state and non-state violations during the last years of Sri Lanka’s ethnic war in 2009/2010. These fellowships are awarded to individuals who face potential violence in their own country as a result of their human rights work.