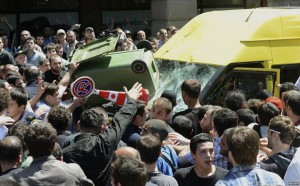 On May 17, Georgian LGBTQI activists were assembling in the country’s capital, Tbilisi, for a peaceful rally to mark the International Day against Homophobia and Transphobia (IDAHO) when the event was cut short by a violent crowd of counter-protesters reported to number in the thousands. Clashes resulted in 17 people being injured, 12 of whom were hospitalized, including three policemen and a journalist. Police guarded several dozen LGBTQI activists and bussed them out of the city center shortly after they arrived at the gathering. Georgia’s human rights ombudsman, Uchi Nanuashvili, called Friday’s events “deplorable.”

Through a re-granting partnership, Urgent Action Fund supports the Women’s Fund in Georgia (WFG), which in turn funds activities and initiatives for social change carried out by women’s groups in Georgia. In response to these hateful attacks, earlier this week WFG provided a security grant to an LGBTQI organization involved in the IDAHO protest. WFG noted that the situation is still increasingly dangerous for LGBTQI people and their allies in Georgia, citing numerous attacks against LGBTQI groups in the last few days.

Mariam Gagoshashvili, a prominent LGBTQI activist and the Program Coordinator of Women’s Fund in Georgia, experienced the fear and violence surrounding the Tbilisi pride event. Read her first-hand account here. Below is video footage from BBC covering the event.