In recent months, hundreds of NGOs across Russia have faced unannounced background checks as a result of the “Foreign Agents” Law. The bill, signed into law by President Vladimir Putin on July 21, 2012, requires nonprofit organizations that receive funding from outside Russia to publicly declare themselves as “foreign agents”– a term that, to Russians, evokes memories from the cold war-era and is meant to discredit the organizations’ work.

The latest in a series of attempts by the Russian government to restrict civil and political liberties, the law is intended to curtail the activities of organizations that openly criticize the government. Specifically, the law authorizes surprise checks of nonprofit organizations in Russia and imposes fines up to $30,000 for the use of “extremist speech” in published materials.

UAF grantee, Side by Side LGBT Film Festival, was one of the organizations to receive unannounced checks by Russian authorities earlier this year. On March 21, officials from the Ministry of Justice, along with tax inspectors and police, visited Side by Side.  The officials demanded the submission of 24 separate items, ranging from proof of the organization’s legal status to all financial documents over the last three years. On April 23, Side by Side was required to deliver copies of all films screened over the last five years, as well as all grant applications and printed publications.  On May 6, the government accused Side by Side of violating the Russian law on two instances: publishing a brochure titled “The Worldwide LGBT Movement: Local Practices to Global Politics,” and for taking part in a social awareness campaign against the recently adopted bill banning “gay propaganda” among minors.

“The Russian government continues to exercise increasingly repressive measures. The court case presently facing Side by Side LGBT Film Festival is yet another attempt to silence the work of the festival. In the event a guilty verdict is found, the implications are far reaching – threatening not only the existence of the organization, but a further confirmation that those in power are determined to continue… bringing a stop to the development of a real, democratic society in Russia.” – Manny de Guerre, Founder, Side by Side LGBT Film Festival 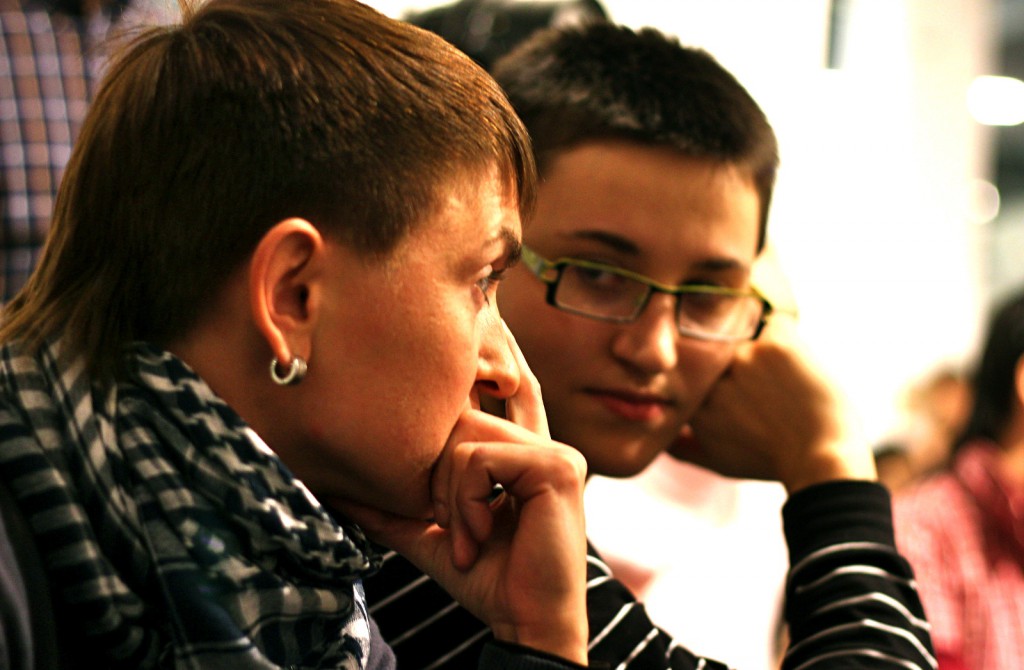 A moment of reflection during the Side by Side LGBT Film Festival in October 2012.

Within this context of increasing prosecution of NGOs and civil society groups, as well as rising homophobia in Russia and the region, extending support to LGBT and other rights groups is especially important. Just last week, UAF responded to an urgent request from Side by Side to help them ensure sufficient legal representation in the court to fight against these politically motivated charges.

Side by Side LGBT Film Festival is an LGBT organization based in Saint Petersburg, which aims to establish free and open cultural spaces in which gay and transgendered persons are able to affirm, question and extend their identities. Through the medium of high-quality, intelligent film, Side by Side seeks to create a forum for discussion with society at large, dismantling myths and stereotypes that continue to hamper the development of the LGBT community in Russia.  The fifth annual Side by Side LGBT Film Festival was held in Moscow between April 18 – 21 and featured 17 films from around the world dealing with LGBT issues.