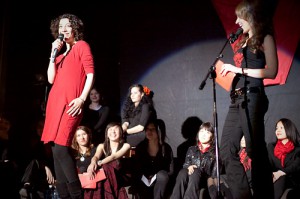 In Kyrgyzstan, a remote mountainous country in Central Asia, there are strong social and cultural stereotypes that prevail in regards to sex workers. Many believe that sex workers are to blame for spreading HIV/AIDS and other sexually transmitted diseases. There is a widespread conviction that prostitution is synonymous with criminal activities, drug addiction and alcoholism. Sex workers in Kyrgyzstan experience violence and extortion by customers and police, and have no legal venues to seek protection or file a case. There are very few organizations working with sex workers.

On September 28th, 2012, the Kyrgyz Parliament registered a draft law to introduce fines and imprisonment of sex workers. The proposed law was scheduled for a hearing by the Parliament. In response, UAF awarded a rapid response grant to Tais Plus, an organization dedicated to protecting and advancing the rights of sex workers in Kyrgyzstan, to organize a public campaign to prevent the draft law from passing.

The campaign included public hearings in six locations around the country, where sex workers, HIV/AIDS organizations, government representatives and media discussed their position on the proposed law as part of a dialogue with the local community.  Over 1000 local and global organizations, civil society groups and citizens signed a petition letter in support of sex workers’ rights. As a result of this campaign, the sponsor of the draft law, the Ministry of Internal Affairs, withdrew its proposal.

According to Tais Plus and their supporters, the campaign against criminalization of sex workers helped to bring attention to the status of women in Kyrgyzstan as a whole.