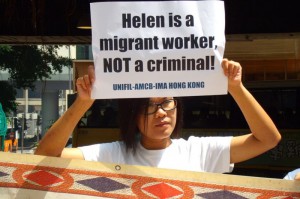 Helen Carumba, a domestic worker, women’s human rights defender, and mother of three, was arrested in March on charges of falsification of documents. Instead of being immediately deported, as Taiwanese law stipulates, she was unlawfully detained for four months and then sentenced to an additional ten months imprisonment.

Helen, like many women, left her home in the Philippines to work in Taiwan and send money to her family. She became an organizer, helping domestic workers in Taiwan learn about their rights and supporting women who were being abused by their employers.

Facing a narrow window of opportunity in which to act, Asia Pacific Mission for Migrants (APMM) requested immediate support from Urgent Action Fund to mobilize around this precedent-setting case.

Helen’s release is a proof of our collective efforts and solidarity. By mobilizing our friends, networks and the people both in and outside Taiwan, we are able to challenge existing laws and policies and push not only for the recognition but also protection of the rights of migrant workers. 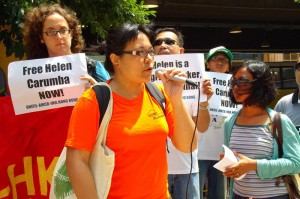 A WPMM staffer speaks at a rally in Hong Kong

With UAF support, APMM led a campaign for the immediate release of Carumba, pointing to the flaws in Taiwan’s recently amended immigration act that criminalizes migrant workers and mandates severe sentences for minor offenses.  APMM networks in both Hong Kong and the Philippines held protests at the Taipei Economic and Cultural Office in each country, while foreign domestic workers in Taiwan picketed the National Immigration Administration (NIA) Office. An open letter addressed to Taiwan President Ma Ying-jeou was also circulated and submitted, with 57 regional, national and local organizations from 15 countries as signatories.

As a result, Carumba was released and repatriated back to the Philippines in September. She is currently preparing to file charges against negligent Philippine officials. Her activism and leadership in Migrante International, a migrant advocacy organization, has inspired the support of many of her fellow migrant workers.