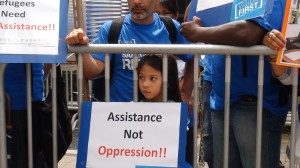 In March 2013, Hong Kong’s High Court made a landmark decision to overhaul the city-state’s refugee status determination process by the end of the year. This month, the government is holding legislative sessions to determine what this new structure will look like. In response to this opportunity, 25-year-old Pakistani journalist, blogger, and one of the founders of Karachi-based free expression NGO Bolo Bhi, Sana Saleem, recently requested support from UAF to launch a campaign “Stories Beyond Borders” highlighting the stories and challenges that refugee women in Hong Kong face. The goal of Sana’s campaign is to influence the current discussions in Hong Kong and ensure that the needs of refugees and asylum seekers are appropriately taken into consideration.

Currently, Hong Kong relies on the UNHCR to process all of its refugee claims and has no domestic asylum process. Due to the UNHCR’s capacity constraints, asylum-seekers in Hong Kong frequently wait up to five years for their refugee status determination interviews, during which they have to survive on minimal support from local NGOs, have no right to employment, and have very limited rights to education and healthcare. In addition, refugees and asylum-seekers suffer from prejudice and negative misconceptions due to damaging media coverage, and are often isolated from their communities support networks, adding additional stress to their already difficult circumstances. 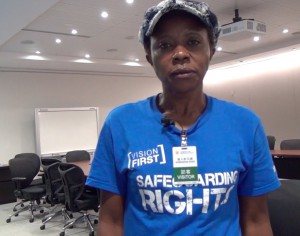 A mother, and refugee from Uganda, prepares for a demonstration in Hong Kong

Working in collaboration with local organizations, Vision First and Inmedia Hong Kong, Sana is using the UAF grant to document the realities of refugees in Hong Kong, including video interviews with refugees, audio footage of refugee meetings, and written testimonials by refugees describing the challenges they face. If successful, Sana hopes that the campaign will result in increased rights and a shorter waiting process for refugees and asylum seekers.

As Sana points out, “the stress, both physical and emotional, is threatening the lives of refugee women.” She draws on the example of Dilini, a refugee from Sub-Saharan Africa, who has been seeking asylum in Hong Kong for several years. While pregnant, her husband was sent to jail for working as a dishwasher — asylum seekers can get up to eighteen months in prison if caught working. Devastated, and without a financial or social support network, Dilini miscarried due to the stress. Frail and vulnerable, Dilini continues to struggle to find emotional and medical help.

Unfortunately, stories like Dilini’s are all too common in Hong Kong. Currently, there are more than 5,000 female asylum seekers, and 400,000 migrant women, in Hong Kong who continue to face dire situations — limited access to rights, unable to work, and no clear path towards asylum or citizenship.

Women remain a significantly small fraction of the refugee community [in Hong Kong], which makes their plight even more invisible. With limited resources, migrant women continue to face hardships in Hong Kong, including getting arrested during pregnancy.

Despite these hardships, Sana remains cautiously optimistic that the new system will be a positive reform. “Organizations such as Vision First have drastically changed the refugee situation in Hong Kong.” Through public demonstrations, media campaigns, and political lobbying, Vision First and other NGOs are making their voices heard and are increasingly becoming part of the public debate.

For example, following a recent presentation by Vision First before Hong Kong’s legislature, Labor Party lawmaker, Fernando Cheung Chiu-Hung, issued the following statement: “Today you have taken a huge step, you’ve shown the people of Hong Kong that refugees exist, you’ve shown them your life and the problems you face while living in Hong Kong, before this day the government and the people couldn’t comprehend what you’ve shared with them today.”

Thanks to activists like Sana and Vision First, Hong Kong is one step closer to assuming responsibility for its asylum requests from a human rights perspective, potentially creating a more hopeful future for women like Dilini.