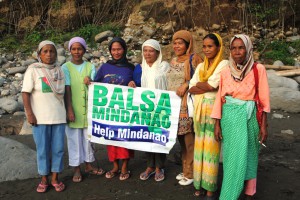 Typhoon Washi hit the Philippines in December 2011, killing more than 1,000 people and displacing hundreds of thousands more. As in many post-disaster zones, women and children in northern Mindanao were the most affected and were exposed to higher rates of violence because of a lack of resources and law enforcement. Women and children suffered the most in terms of accessing basic needs such as food, shelter, health and sanitation, financial assistance and housing relocations.

With the help of a rapid response grant from UAF, Rural Missionaries of the Philippines (RMP) organized a grassroots Women Survivors Collective to address the specific needs of women recovering from the typhoon. The Collective ensured that women were empowered and involved in relief camp management, as well as consultations regarding rehabilitation efforts. The Collective also functioned as a grassroots monitor of sex trafficking cases in the camps.

Together with government agencies and relief organizations, the women survivors believe that we can be effective and powerful agents of change. And so we stand together, to voice our truths, to finally put an end to this devastation and to rise as women stewards of sustainable social and economic development. 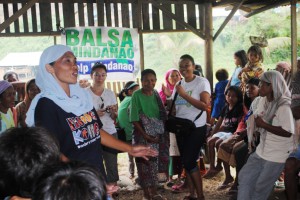 RMP staff reach out to women survivors in a relief camp

As part of this work, RMP facilitated 17 weekly radio programs that highlighted women’s issues in evacuation centers and advocated for a humanitarian response that included women in all community rehabilitation consultations. On International Women’s Day, RMP participated in two rallies where 4,000 women survivors of the typhoon marched together. As a result of their efforts, the local government made strides in mainstreaming gender into the rehabilitation process.

Because UAF’s grant was awarded within days of RMP’s request, they were able to provide immediate support for women survivors, while offering a long-term strategy to prioritize gender issues in the post-disaster recovery efforts in northern Mindanao.