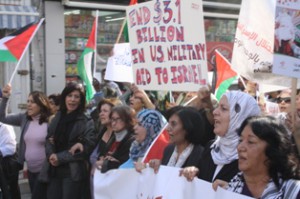 Women participate in a Solidarity March in Ramallah, Palestine on November 17, 2012.

More than 130 Palestinians and five Israelis were killed and over 1,000 people were wounded, including 140 children and 83 women, as a result of Israel’s military attack of the Gaza Strip from 14 – 21 November 2012.

In response to this, UAF awarded two rapid response grants to women’s organizations in Palestine and Israel requesting funds to mobilize their communities in peaceful protest.

The first grant, in support of The Association of Women Committees for Social Work (AWCSW) in Ramallah, was used to organize a Solidarity March in Ramallah, Palestine.  The march brought thousands of women activists and children from rural communities in Palestine to come together in solidarity with women and their families. During the march, AWCSW mobilized support for children with war-related trauma and released hundreds of black balloons in memory of each Palestinian killed during this conflict.

“Among the victims of this war are many women and many more children… this day of solidarity and peaceful protest against the ongoing war is an opportunity to unite women from all walks of life, political affiliations and beliefs. [It] will be organized by women for women to gain more attention and respect.” 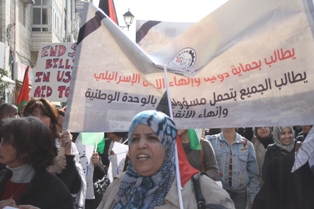 The second grant, in support of the Coalition of Women for Peace (CWP), was used for peaceful demonstrations in Israel and to launch an international media campaign to end the violence. CWP mobilized its international network of peace, human rights and feminist activists to pressure the Israeli government to cease its military actions.

CWP is an Israeli non-profit and leading feminist voice that seeks to end the occupation of Gaza and the West Bank and to contribute to a just peace between Israelis and Palestinians, with a special emphasis on the role of women as actors for social and political change.

Since it’s founding in 1997, UAF has awarded more than 328 grants in response to situations of escalating violence in 58 countries around the world.