Garment Workers in Cambodia Strike for Their Rights

In Cambodia, garment workers – 90% of who are young women from rural poor families – are striking to demand higher wages and humane work conditions. 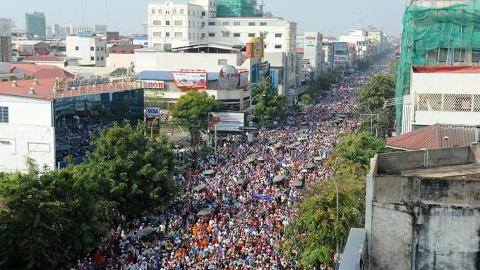 Garment workers march through the streets of Phnom Penh, Cambodia.

The garment industry is Cambodia’s biggest export industry, generating over $5 billion in international sales for the country and employing approximately 500,000 people. Many workers were paid just $80 a month until this February when minimum wages were raised to $100.

Over the New Year, tens of thousands of workers went on strike, organizing public demonstrations calling on the government to raise the minimum monthly wage from $100 to $160.

“The worst state violence against civilians to hit Cambodia in 15 years.” – Cambodian League for the Promotion and Defense of Human Rights

Following this state-sponsored violence, Urgent Action Fund made a rapid grant to Cambodia Alliance of Trade Unions (CATU), which advocates for fair labor wages, labor rights, and work conditions with employers and the Cambodian government. The grant supports additional security and protection for CATU’s women union leaders and their families, so that they may continue to build upon the momentum to mobilize workers for the next general strike.

This is a critical moment in the women’s rights movement in Cambodia, both as a response to the escalation of state-sponsored violence and to build upon existing advocacy strategies to advance the rights of garment workers.