Urgent Action Fund partners, Bishkek Feminist Collective SQ, were attacked during an International Women’s Day event in Bishkek, Kyrgyzstan on March 6, 2014. Below is their account of the attack.

On March 5th from 15 to 19 PM an activist team of Bishkek Feminist Collective SQ was carrying out a planned informational event, dedicated to the 8th of March (IWD) at an intersection of Kievskaya and Beishenalieva streets. The event included trivia with questions on the history of 8th march, statistics on women in Kyrgyzstan and the women’s movement, a stand with number “8”, feminist symbols (based on the Venus symbol) and captions “International women’s day of equal rights and opportunities”, “Time to act, Kyrgyzstan!” Activists were informing passersby about women’s rights, prevention of violence and the history of March 8th. The event was carried out with the permission of Lenin district administration.

At approximately 18 PM, when the event was coming to an end, a group of  of about 20-30 people gathered around the stand. They began aggressively asking questions about feminist signs and accusing activists of promoting Christianity.

The majority of them were men, who scared off passing women by asking the question “Why do women need rights?”. The crowd grew, there were increasing more men, who were yelling out nationalist and xenophobic accusations and questions: “Why do you have crosses on your stand? Are you not Muslims?”, “Don’t you believe in God?”, “Are you not Kyrgyz?”, “You, I see is a Jew, and you are also a Jew, since you talk so much…”, “You are Kyrgyz and you don’t speak Kyrgyz?!” “Do you see this ak kalpak (type of headdress), this makes me a Kyrgyz and if you are Kyrgyz you should be a Muslim” and so on. 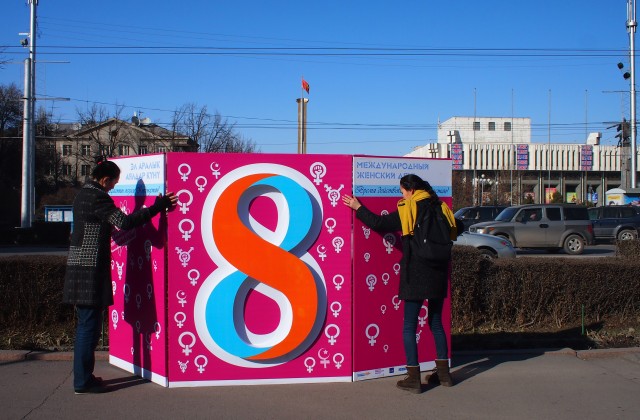 The crowd surrounded activists, grabbing them by the collar, spitting at them and breathing out cigarette smoke into their faces. Activists began to gather the stand and left the place, but the crowd followed them, jeering and yelling out calls for violence. After catching up with the activists, men suddenly began kicking the stand and punched it through.

In two minutes the crowd destroyed the stand, after which they started smashing everything around. It was impossible to film anything, since activists were pushed and attacked. Calling one activist a ‘faggot’, people from the crowd began kicking and beating him, pushed him to the ground. Then someone hit another activist on the head. There was a police booth within 20 meters of the stand. One of the activists asked for help, but the police officer ignored this request, even after being shown the permission from the district administration.

Activists were forced to run to the building of Lenis district court and hide inside. However, a guard in the building, hearing the shouts of the crowd, tried to force activists out of the doors. Moreover, after hearing activists out, several court employees supported the crowd, saying that activists did not believe in God and had to be punished, and demanded that they leave the building, thus putting their lives and health at risk. At that moment, the police arrived, however one of them was supporting the crowd and also tried to hand the activists to the crowd outside. Luckily, other police officers did not share his views and helped activists come out of the building, get into the police car and took them to the police station of Lenin district. However, police officers were not able to render adequate resistance to the crowd and did not take urgent measures for detaining perpetrators and instigators.

At this moment a group of other activists came to the Lenin district court to help their colleagues. When they arrived there, they were surrounded by the crowd. One of the people shouted that they need to be punished by the people’s court. At that moment, officers of Lenin DOIA came to the spot and took activists to the police station for further clarification. 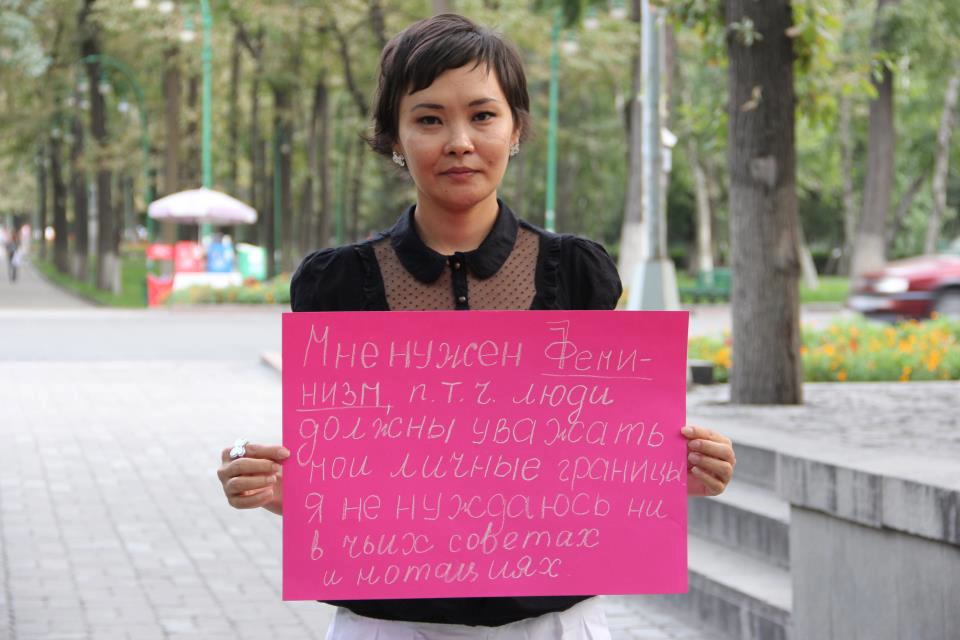 Members of Bishkek Feminist Collective SQ participate in a “Why I Need Feminism” Campaign.

This case of violence is not a single event or a turn of events: violence and hate are repeated systematically  and everywhere; currently such occurrences are perceived by the society as something normal. What we experienced yesterday is an everyday and usual personal experience of the majority of women and girls in the country. This action showed that the society does not want to see women in public places as active participants of public and civil life, and as the opponents of the event stated “women do not need rights, because they will always be in second place”. Often the home is called an appropriate place for women.

We want to remind that the home is the unsafest place for women and girls. Over 80% of violence against women and girls is domestic violence and rape on behalf of husbands, former partners, relatives, which happen 3-4 times more often than violence on behalf of strangers. We  express our gratitude to Rahat, a worker at the Osh bazaar, who took the side of activists, and solidarity with all women and girls working in Kyrgyzstani markets.

Violence is a political issue, since respect, promotion and protection of our freedoms and rights, our safety and our lives is the duty of our politicians.

We demand the government to duly investigate this case of instigation of interreligious and interethnic violence and hatred; to investigate the threats to life and health, beatings and harassment of activists and bring perpetrators to responsibility; to thoroughly investigate violations of official duties on behalf of employees of Lenin district court and police officers and bring offenders to responsibility; to mandatorily ensure full protection and safety of participants of peaceful assemblies; to openly condemn hatred and violence, as well as any attempts to justify such violence and hatred; to create and ensure specific, comprehensive measures (policies, laws, procedures and programs) on the prevention of hatred and violence, which are, first of all, aimed at the needs, interests and rights of people who experienced crimes and violence on the basis of hatred.