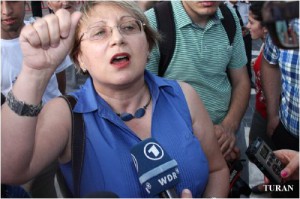 On 28 April 2014, human rights defender Ms. Leyla Yunus and her husband, Arif Yunus, were detained in the airport while boarding a flight from Baku to Doha in Qatar. There are reports that they were released after a night in custody, and it is also understood that the home of the Yunus family, as well as their office has been searched. Yunus has already been interrogated about her relations with Rauf Mirgadirov, an Azerbaijani journalist known for his critical political reporting.

Leyla Yunus is the director of the Azerbaijani Institute of Peace and Democracy, and is known for her work against corruption and human rights violations. Yunus and her husband Arif are also known for seeking reconciliation with Armenia and finding a peaceful resolution to the Nagorno-Karabakh conflict. It is suspected that her arrest is connected to the current government’s continuous efforts to curb her work. She is being accused of ‘spying for Armenia.’

Leyla Yunus was held in detention overnight for 11 hours and was not allowed to use the toilet. She was eventually allowed to go but only in the presence of a male police officer. Her husband suffered from hypertension and was taken to hospital. He is stable now.

Urgent Action Fund for Women’s Human rights is alarmed by the arrest and unlawful detention of Leyla Yunus and Arif Yunus, and is concerned for the ongoing vulnerability of human rights defenders in Azerbaijan, many of whom have faced unlawful arrests in the last few months. Urgent Action Fund is concerned that the arrests are motivated by Leyla’s tireless work towards free and just society in Azerbaijan.

Urgent Action Fund urges the authorities in Azerbaijan to immediately and independently investigate the accusation of threats and intimidation against Leyla Yunus and her family; stop illegal searches of her home and office; and guarantee that human rights defenders can carry out their human rights work without fear of reprisals, as established in the 1998 UN Declaration on Human Rights Defenders.