Demanding an End to Violence in Gaza 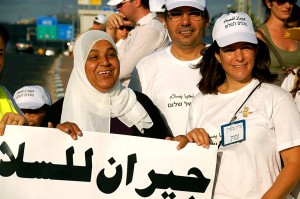 In response to the indiscriminate killing of more than 1,000 civilians during the Israel-Gaza conflict during July – August 2014, several women’s rights organizations in Israel and Palestine demanded an end to the violence.

Urgent Action Fund provided urgent funding to several women’s groups working to unite Palestinian and Jewish Israelis in calling on their government for an immediate ceasefire and for a cessation of violence on all sides.

Two groups, The Coalition of Women for Peace and Awareness For You, were instrumental in calling on their government to end the violence.

The Coalition of Women for Peace is a Tel Aviv-based organization that encourages the active participation of Palestinian and Israeli women in peace building efforts. With rapid support, the Coalition organized a peaceful demonstration to protest the ongoing violence and advocate for a non-violent resolution to the conflict.

Awareness for You is a women’s group in Kfar Qara, Israel that promotes gender equality and seeks to change attitudes about prevailing gender stereotypes. Awareness for You brought together Palestinian and Jewish Israelis to call for an immediate end to the violence. The protest included a human chain with the message ‘Neighbors in Peace.” The organization also engaged religious leaders from both sides in peace talks.