Mu Sochua Released From Prison, More Determined Than Ever 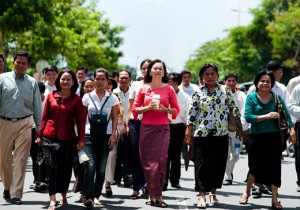 Yesterday, we received this note from our Advisor and Member of Parliament-elect in Cambodia, Ms. Mu Sochua, upon her release from prison:

“The power of women’s networks cannot be undermined. These networks inside and outside Cambodia got rolling the minutes my colleagues and I were surrounded and finally arrested by police. The women, mainly grassroots worked tirelessly, standing and shouting outside the police station where I was kept handcuffed the entire night, at the Court House, in front of the prison outside the city, all united, with one voice: Justice.”

On 15 July 2014, Ms. Sochua and six of her colleagues were arrested and placed in pre-trial detention for charges of insurrection, following a clash between district security guards and protesters in Phnom Penh.

What followed was a vocal campaign, led by women’s and human rights organizations in Cambodia and internationally, demanding for her release. From all-night demonstrations held outside of the police station where she was being detained, to a viral online Twitter campaign #FreeMuSochua, to calls for her release by Vital Voices and former U.S. Ambassador for Global Women’s Issues, Melanne Verveer, — women around the world mobilized in support of and solidarity with Ms. Sochua and her tireless pursuit of democracy and justice. As a result of these efforts, on 22 July 2014, Ms. Sochua and her pro-democracy colleagues were released on bail.

Despite her illegal detention, and the pending charges that carry a sentence of up to 30 years, Ms. Sochua’s spirit remains more resilient than ever. In a recent interview with Voice of America, Ms. Sochua said: “I’m not intimidated by arrest…Instead, my will to defend the people and fight for democracy is even sharper and more determined.”

In her message to Urgent Action Fund, Ms. Sochua vowed to keep her promise to the women she met while in prison:

“There’s so much to be done for the people. I am determined to continue to fight for justice for my people, especially the women in Cambodia.”