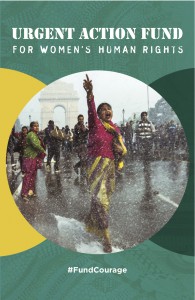 Hot off the press! Our 2013 Annual Report: #FundCourage highlights the achievements of the courageous women and LGBTQ activists we partner with around the world, as well as the generosity of supporters who make this work possible.

Your voice and your participation matter. This year, we are asking you to take your activism online. Use the hashtag #FundCourage on Facebook and Twitter to share why you support courageous women and LGBTQ activists working for equality and justice worldwide.

Thank you for being part of the Urgent Action Fund community in our joint efforts to advance women’s and LGBTQ movements worldwide.