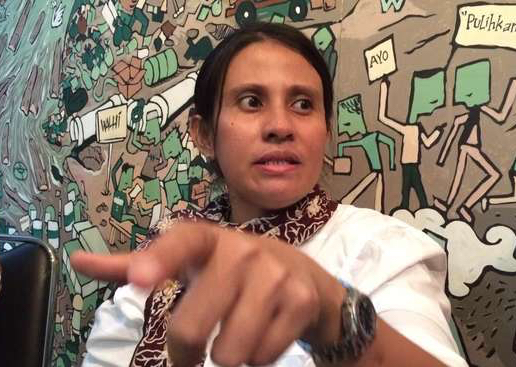 Eva Bande is an Indonesian land rights activists and mother of three. In May 2014, she was sentenced to four years in prison for her participation in a peaceful farmer-led demonstration against a national palm oil company. That is when she reached out to Urgent Action Fund for support.

Despite its widespread prevalence, the palm oil industry is largely unregulated, and linked to deforestation, climate change, and human rights violations in the countries where it is produced. While palm oil is grown throughout Africa, Asia, North America, and South America, 85% of all palm oil comes from Indonesia and Malaysia.

“The government must be willing to create real solutions and to act against private companies taking land illegally and with force.”

In Indonesia, the human and environmental impact of the palm oil industry is devastating. Palm oil corporations rely heavily on child labor, regularly take land owned by indigenous peoples, often without consent, and more than a third of the country’s mammal species are considered to be critically endangered as a result of this unsustainable practice.

Worldwide, more than 900 citizens were killed between 2002 and 2013 for protecting rights to their land and environment.

For Eva, the issue came to a head in 2011, when a national palm oil company attempted to build a palm oil plantation in Indonesia’s Toli Bara sub district that was owned by indigenous farmers, and which had been set aside for reforestation. In response, Eva began to mobilize farmers and coordinate advocacy programs to protect the area and its inhabitants. 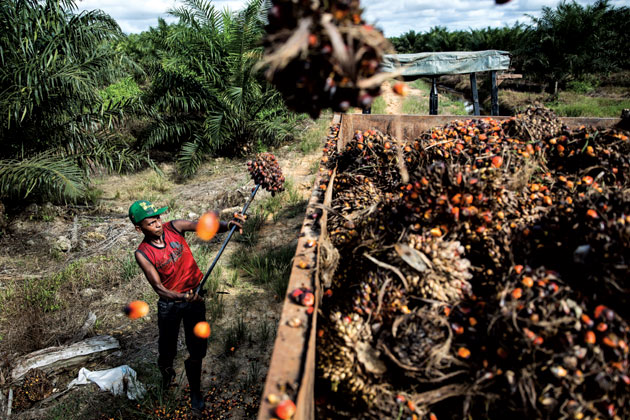 Despite opposition from local farmers and activists, the company continued with its plans to expropriate the land, including shutting down many roads connecting farmers to their cocoa and rice fields. Enraged, the farmers organized a peaceful demonstration in front of the company’s headquarters to reopen the roads on May 26, 2011. When Eva tried to ease the escalating tensions, she was arrested for allegedly inciting violence, which was not the case.

Fast forward to May 15, 2014. Eva, who has been on parole for three years since her 2011 arrest, was rearrested for her activism, along with two farmers. This time, she was sentenced to four years in prison without parole.

Upon her imprisonment, Urgent Action Fund immediately provided a grant to cover Eva’s legal expenses to have her case heard by the country’s Supreme Court, as well as support her family during her incarceration. In addition to new evidence, the case brought national and international pressure to her cause. As a result, the country’s new President, Jokowi Widodo, granted Eva clemency. On December 19, 2014, Eva was released from prison reunited with her family, just in time for the holidays. 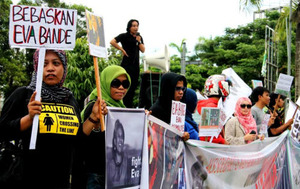 Protesters demonstrate for the release of Eva Bande on December 6, 2014.

Eva’s release brings attention not only to the destructive practice of palm oil extracation, which pollutes the environment and displaces local communities, but also to the criminalization of women’s human rights defenders around the world who, like Eva, are standing up for the protection of their communities’ lands and rights.

Reunited with her family, Eva continues to be unwavering in her commitment to defending her people’s lands and rights. As she says, “Even though I am glad that I was granted clemency, it is not the end of the many agrarian conflicts evident to this day. The government must be willing to create real solutions and to act against private companies taking land illegally and with force.”