Ensuring Protection for Women in Syria

As Iraqi Kurdish forces fight to keep the Syrian border town of Kobani from falling to the Islamic State, and tens of thousands of civilians are trapped with limited food and water, there’s one story that sits beneath the headlines.

Women protest during a demonstration in support of the besieged citizens of the Syrian town of Kobani and against ISIS, November 1, 2014. Photograph by Hosam Katan/REUTERS

Amira Hakimi (name changed to protect privacy) is the president of a women’s rights organization in Kobani that works to advance the rights of Kurdish women and girls. With the expansion and aggression of ISIS in Syria and northern Iraq, Amira and her staff have received threats against their lives. And that’s when she contacted Urgent Action Fund.

“Our lives are in danger, if we do did not leave as soon as possible, we might be subject to murder, rape, kidnap or detention, ” wrote Amira in a recent email to Urgent Action Fund.

Amira requested a grant of $5,000 to relocate her office and staff to a safer location, across the border into Turkey and away from the violence. Within 48 hours, Urgent Action Fund responded to her request – ensuring Amira and her colleagues’ safety and ability to continue their work to support women and girls during this critical time.

Supporting Amira to escape Syria and relocate is incredibly important, both for her safety, and also the longevity of the women’s rights movement in Syria and the region. Women’s human rights defenders are on the front lines of movements for peace, equality and justice. If their voices are silenced, so are the movements they lead. That is why Urgent Action Fund responds to all requests, in any language, within 72 hours – time that could be the difference between life and death. 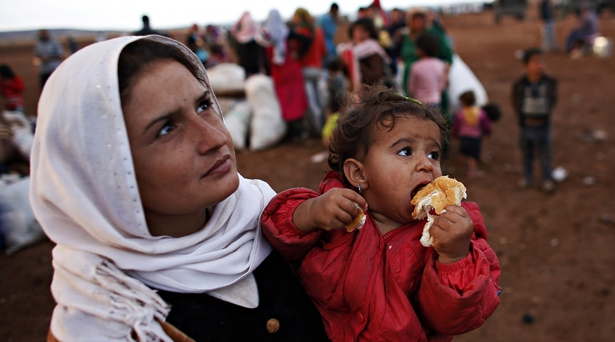 A Syrian Kurdish woman and her daughter after crossing into Turkey. Photograph by Murad Sezer/REUTERS

This is vital work that doesn’t make the headlines. Join Urgent Action Fund in supporting courageous activists, like Amira, who are on the front lines of gender equality and human rights.