Speaking Up For The Rights Of Women Teachers In The Philippines

Maria Mendoza (name changed to protect her identity) is a former physics teacher, a women’s rights activist, and a new mother. On June 7, 2014, she was arrested by 20 paramilitary officers while on her way to buy milk for her 6-month old son. Her crime? Speaking up for the human rights of teachers in the Philippines – 80% of who are women.

According to The Alliance of Concerned Teachers (ACT), a national alliance of teachers in the Philippines, teachers receive on average just $320 a month – the lowest salaries among the ranks of professionals in the Philippines – forcing many teachers to take out predatory loans to cover basic living expenses to support themselves and their families. Women teachers, in particular, face additional burdens.

“The usual family situation requires that [women] take on the responsibility of maintaining a home and taking care of children, over and above their teaching jobs. Female teachers [also] experience sexual abuse from higher officials when they try to apply for jobs or follow up on their salaries…” – The Alliance of Concerned Teachers 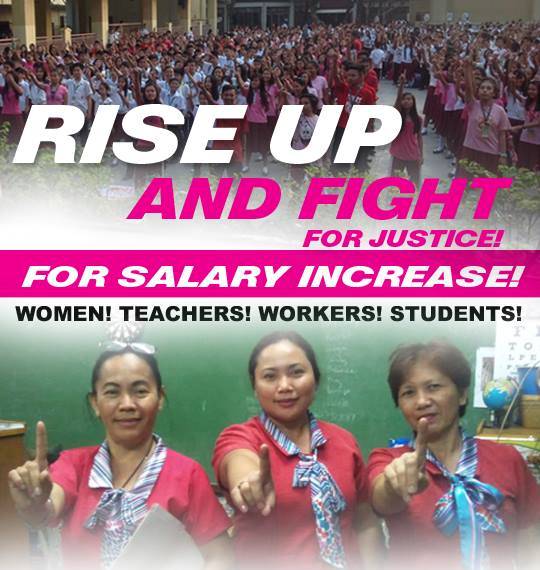 Outreach material for a protest demanding higher salaries for women teachers in the Philippines.

As a result of her activism, Maria has become a target of a series of threats and harassment from state actors. Her family members are routinely followed, and her friends and colleagues are frequently questioned by authorities as to her whereabouts and activities. In this latest act, the military falsely accused her of being a member of the Maoist rebel group The New Peoples Army, a common intimidation tactic used to silence human rights defenders in the Philippines.

In November 2014, after being imprisoned for five months, Maria was finally released on temporary bail while awaiting pre-trial. However, even as her temporary liberty should be a cause for celebration, she and her family have received increasingly serious threats.

Despite the ongoing threats, Maria is looking forward to resuming her work as a women’s human rights defender, and is hopeful that the current campaign will raise awareness not only about her case, but about the need to protect the rights of women teachers, in the Philippines and around the world.