Women Walk For Peace in Korea

On Sunday, May 24 2015, thirty women leaders from around the world made a rare and risky crossing of the demilitarized zone (DMZ) between North and South Korea to call for peace on the 70th anniversary of the division of the Korean Peninsula.

While a temporary ceasefire agreement has been in place for more than 60 years following the ended the Korean War, which claimed an estimated four million lives, the ceasefire has never been replaced with a peace treaty. As a result, the 2 mile-wide and 155 mile-long demilitarized DMZ continues to divide the Korean peninsula with recurring tensions that serve as a sobering reminder of the possibility of renewed war.

International women activists including Gloria Steinem and two Nobel Peace laureates on Sunday were denied an attempt to walk across the Demilitarized Zone dividing North and South Korea, but were allowed to cross by bus and complete what one of them called a landmark peace event. (AP Photo/Lee Jin-man)

In 2013, five New Zealanders crossed the DMZ, traversing the seemingly impermeable border. They rode their motorbikes from Mt. Paekdu on the northern border with China all the way down the peninsula to Mt. Halla on the southernmost island of Jeju. This prompted a group of leading women peacemakers to begin imagining a women’s peace walk across the DMZ—many from countries that fought in the Korean War—to bring global attention to the unresolved Korean War and amplify women’s leadership to help reunify the country.

With rapid support from Urgent Action Fund, on May 24, International Disarmament Day, this idea became a reality. On Sunday morning, a bus picked them up from the North Korean side and drove them across the DMZ that has separated the two countries for more than half a century. The delegation included two Nobel Peace Laureates, Mairead Maguire from Northern Ireland and Leymah Gbowee from Liberia, and women leaders from over a dozen countries, many of which participated in the 1950-53 Korean War. 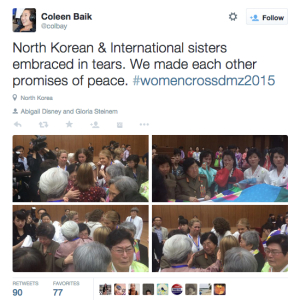 “We feel very celebratory and positive that we have created a voyage across the DMZ in peace and reconciliation that was said to be impossible,” Steinem said after the group, which had originally planned to walk across the zone, arrived in South Korea.

In addition to crossing the DMZ, the activists spoke with women at a series of events during their time there, and will also participate in meetings with women leaders from different regions, as well as advocacy efforts in Washington, D.C. and at the United Nations, which will be crucial in seeing through the passage of a peace treaty.

Looking beyond North and South Korea, the women leading this effort hope that this model — international women peacemakers serving as a bridge between women considered “enemies” — could one day serve as a model for future women-led peace efforts in other regions.