Defending Land and Community: Women on the Frontlines of Climate Justice

This article was originally published in OpenDemocracy on 6 December 2015. The original article can be found here.

Throughout Southeast Asia, hundreds of women environmental activists have been jailed, attacked and defamed as threats to “national security”. They remain without adequate resources, protection and funding for their work.

When world leaders attend international conferences like Conference of Parties (COP21) on climate change, they face political pressure and opposition. When women stand up for environmental rights in their communities, they face harassment, violence, and death threats.

Climate change is not just about international agreements between governments – it matters to people’s lives and to our very survival.

Women comprise the majority of the world’s poor and experience systemic marginalization, discrimination, and violence. This makes them particularly vulnerable to the effects of climate change and environmental degradation. When they mobilize for environmental rights, they face myriad obstacles, both because of their activism and because they are women.

Women are taking leadership at the grassroots level to defend the lives and rights of their communities and implement creative strategies to mitigate and adapt to the consequences of climate change. One of the key ways they are responding to the challenge of climate change is by mobilizing for the land rights of their communities, which not only helps achieve sustainable development but has also been found to reduce CO2 emissions.

The following stories highlight some of the struggles and solutions proposed by grassroots women environmental activists. They are excerpted from case studies based on individual interviews and group discussions during a convening held by Urgent Action Fund for Women’s Human Rights (UAF) and the Samdhana Institute in Indonesia in September 2015. 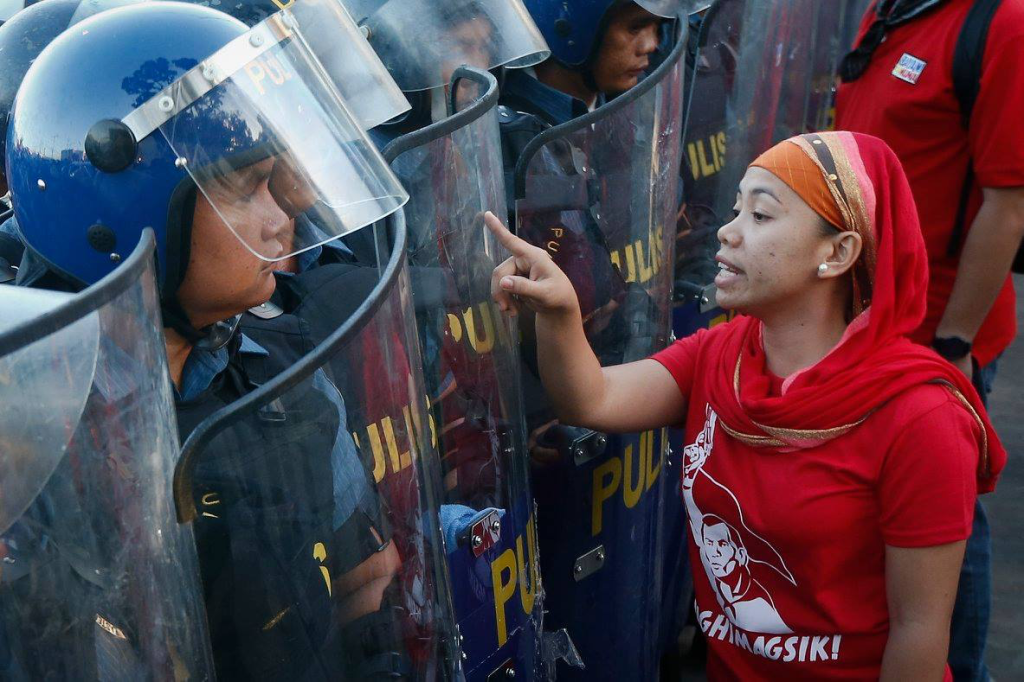 Bai Ali Indayla is a Moro activist from Mindanao in the Philippines, While still a university student, Bai Ali was the first female student to be elected student body president. After graduation, she became active on issues of militarization, peacebuilding and documentation of violations against the Bangsamaro communities in the context of the ongoing conflict between the national government and insurgents seeking regional autonomy. Today, she is the Secretary General of KAWAGIB – Alliance for the Advancement of Moro Human Rights. This position brings increased risk since groups critical of the government’s policies in the region are often branded as threats even though their work is peaceful.

Powerful multinational companies are exploiting resource-rich Mindanao and violating the rights of local people with impunity and the support of paramilitary forces provided by the government of the Philippines. Such extractive activities aggravate climate change.

In Mindanao, criminalization of environmental and indigenous human rights defenders has reached unprecedented levels. Tactics such as false charges and imprisonment, harassment, and violence are used to deter their work. Such threats occur in the context of an ongoing conflict and are sometimes carried out under the pretext of the government’s campaign against local insurgent groups. In addition, human rights defenders, their families and their communities face displacement by the conflict and are targets of extrajudicial killings staged to appear as though they took place because of the military conflict. Women human rights defenders (WHRDs) are at particular risk of sexual violence; rape is used as a shaming tactic and to discourage their activism.

In spite of harassment and threats against her and her family, Bai Ali continues her work tirelessly. Her approach is to protect herself by reporting her experiences publicly. “The more we speak out, the more people are alerted, the more the perpetrator will keep a distance,” she explains, “and as long as there is still discrimination against women and oppression of the people, I will continue advocating for the rights of women, children, and my community.” 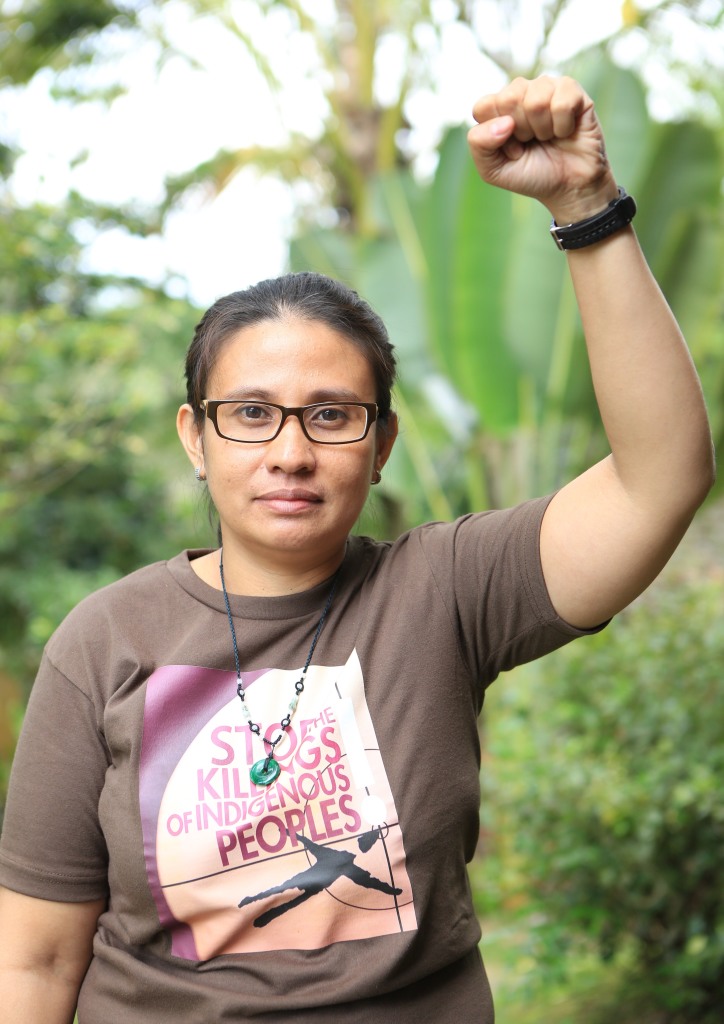 In Indonesia, the situation for women that fight for land rights and environmental justice is equally challenging. Much of the land grabbing and environmental degradation take place in remote areas, making it difficult to document violations. Women also struggle against social norms that have traditionally seen only men as leaders.

Palm Oil Advocacy to organize communities to stop illegal land grabs and monitor environmental degradation. Because of her activism, Eva was arrested and sentenced to 4½ years inprison. Local farmers and community members supported her as she continued to organize behind bars. Finally, the President granted her clemency last December.

Today, she stills faces threats and challenges, but she vows to continue her activism. “To lead is to take risks,” she shared, “the violence I experienced in jail definitely left a mark on me, and it shook the community as well. But we have to continue to strengthen the community because the fight is far from over.”

While she acknowledged the importance of law and policy, including at negotiations like COP21, she stressed that “land justice cannot be discussed only, it has to be put in practice.” 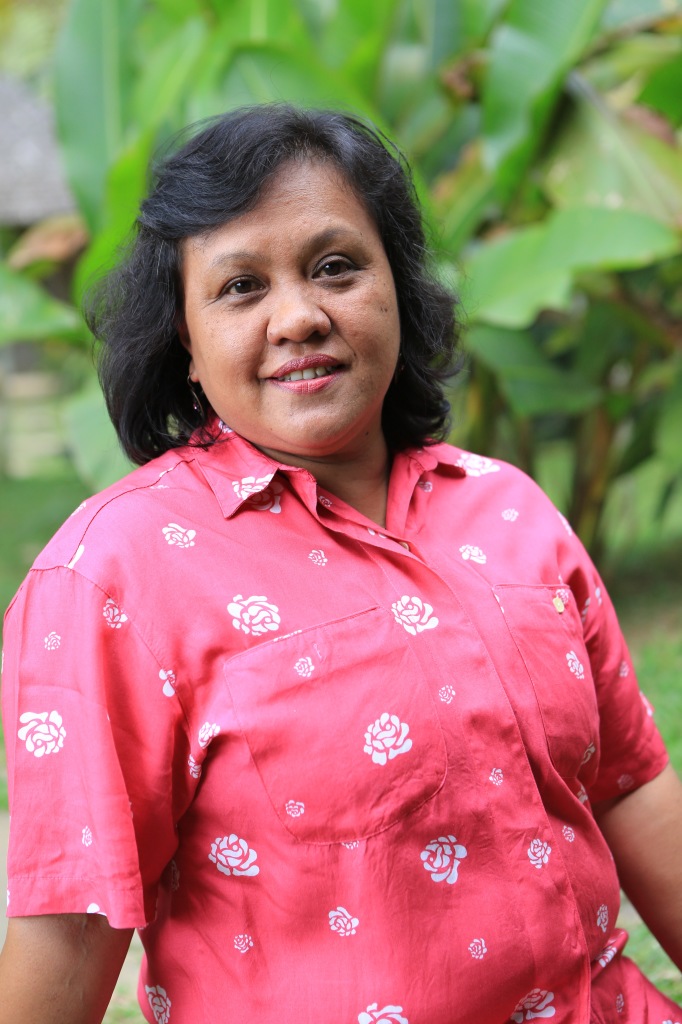 Jull Takaliuang is another indigenous woman advocating for the environment and human rights in Indonesia. Because of her activism to stop destructive gold mining, reclaim beaches from exploitation, and halt illegal logging carried out by members of the police on Bangka Island, Jull has experienced many threats. She was physically attacked by people hired by a mining company, received numerous death threats, was unlawfully detained and placed under house arrest, and was strangled with her megaphone cord while attending a court hearing.

“When the land is taken, we do not have power,” she explained, “we are fighting for a bigger cause: fighting for women who are losing their land, women who cannot fish anymore because the water is poisonous, women who are becoming poorer because the environment is contaminated.” Solidarity from her community and from international allies keep her going in difficult times. Recently, the United Nations Development Programme (UNDP) recognized her achievements by awarding her the N-Peace Prize, which honors local leaders throughout Asia.

The stories of Bai Ali, Eva, and Jull are not unusual. Throughout Southeast Asia, hundreds of women environmental activists have been jailed, have been defamed as threats to “national security,” or have suffered discrimination and violence. Yet, the experiences of these women too often remain untold, and despite their leadership, they still lack the resources and protection mechanisms they need to continue their invaluable work.

At Urgent Action Fund, we believe and trust in the power of women human rights defenders (WHRDs) like Bai Ali, Eva, and Jull to change their communities and the world. We make rapid response grants – responding to requests in any language in under 72 hours – to support their critical work when they face unanticipated security threats or advocacy opportunities. Annually, we award over 800,000 USD to defenders around the world. For instance, when Eva was sentenced to prison for her non-violent protest of palm oil plantations, Urgent Action Fund provided funding for legal support and evidence collection to free her, which led to her presidential pardon and release.

In addition, Urgent Action Fund convenes spaces for WHRDs to learn from each other and we advocate alongside them for better protection mechanisms. Our particular perspective within women’s rights movements allows us to understand firsthand the importance of quick and flexible funding as well as the challenges faced by WHRDs in their mobilization for environmental justice.

From discussing to practicing justice

Raising the profile of women environmental activists is an important step, but we cannot stop there. Their stories must inform the policies we push our leaders to adopt, so that, in Eva’s words, we can shift from merely discussing to truly practicing land justice.

Women engaged in activism for climate justice advocate at local, national, and international levels, including at the United Nations. They are collectively calling for climate justice and are at COP21 to push for a legally binding agreement that recognizes the disproportionate impact of climate change on women and indigenous peoples and strengthens their participation in decision-making processes.

Despite frustration with insufficient policy implementation as well as frequent backlash they experience when their advocacy is successful, the WHRDs with whom we spoke or who we listened to assured us they would not give up on advocacy. “It is not only part of our work,” they told us, “it is part of our body, part of our bones, part of our blood, and part of our lives.”

The least that funders can do is join them in their advocacy to foster anenabling environment for them to carry out their work safely. This means creating spaces and providing funding and other resources for them to advocate for themselves and their communities, recognizing and valuing their experiences, supporting their leadership development and participation, strengthening their networks and resilience to sustain their movements.

As Eva Bande put it, “Networking at the international level can affect public policy in Indonesia. There is a critical need for funding and international support to achieve these strategic objectives.”