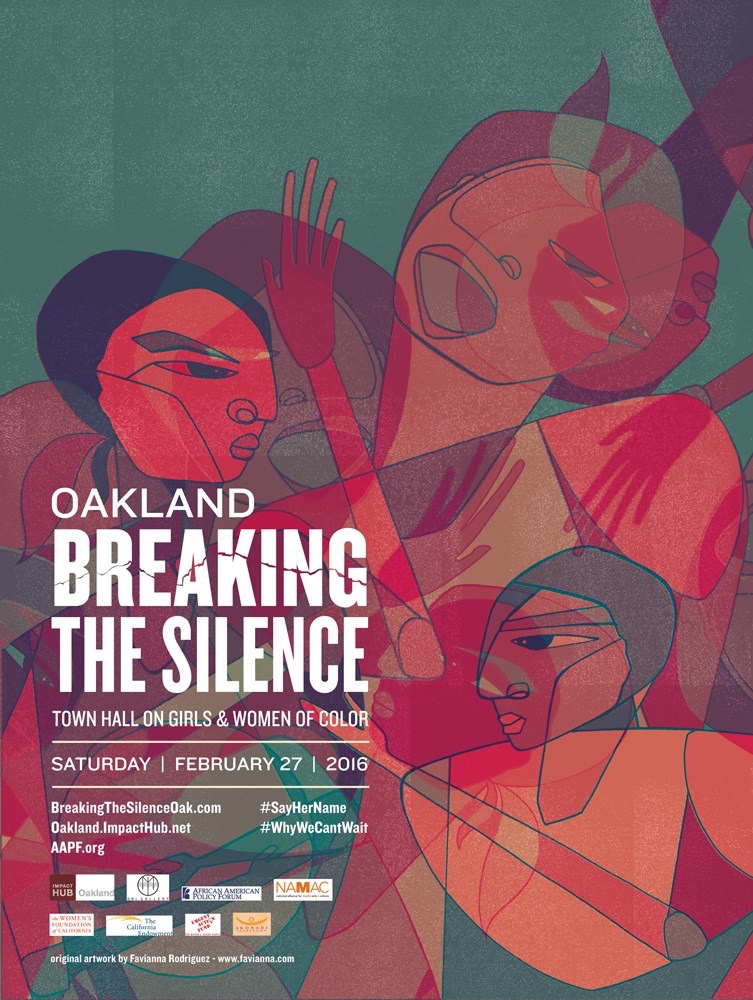 Fund is proud to be a community partner of the “Breaking the Silence” Town Hall (BTSTH) Meeting on Girls & Women of Color is Saturday, February 27, 2016 in Oakland, CA.

The BTSTH represents the conclusion of the “Conjure Circle” Series which produced over six months of artivist (artist + activist) programming highlighting the #SayHerName campaign inside of the #BlackLivesMatter movement in partnership with Omi Gallery at Impact Hub Oakland, Black Out Collective, Black Magic Arts Collective, BLM Oakland and the Akonadi Foundation. The Breaking the Silence Town Hall – an initiative of the The African American Policy Forum – is a part of the national series of convenings focused on elevating the experiences of women and girls of color across a range of issues including police violence, criminalization, school pushout, sexual assault, domestic violence and poverty. The series has taken place in cities across the U.S., including: New York, Los Angeles, Miami, Washington DC, Baltimore, Chicago and Atlanta. You can access a short video preview of the series here https://www.youtube.com/watch?v=9WLbPC9vDrM

The BTSTH hopes to create opportunities for local decision makers to listen to participants about the challenges they experience on a daily basis in their homes, schools and communities, and identify opportunities for intervention. In light of President Obama’s recent speech highlighting the needs of Women and Girls of Color, we believe that the Town Hall is an opportunity for racial justice interventions that center the leadership and creativity of those directly impacted.

RSVP: Tickets for the Town Hall are now sold out. Another way to attend is to sign up as a volunteer or to tune in to our livestream on Saturday, February 27th, 2016 at 12:00PM.  Stay tuned for livestream information.