On Saturday, homeless women who are members of Picture the Homeless helped lead a march through Harlem for International Working Women’s Day. Why? 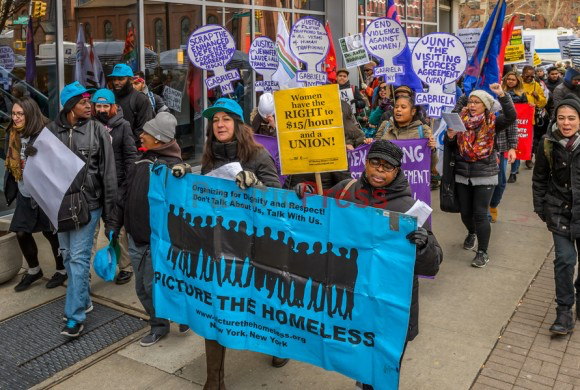 PTH marches at the International Working Women’s Day 2016: Unite & Fight for Liberation rally and march in Harlem. Photo by by Erik McGregor

“As women, it took us a long time to get where we are today,” said PTH member Darlene Bryant, who will be marching on Saturday. “To get the right to vote, to get the right to real freedom of speech. But the fight isn’t over. Women have rights, but we have to stand up for those rights. As mothers, as sisters in the struggle, whether we’re on the streets or in a shelter, we need to stick together. Homelessness impacts women differently than men. We have to deal with the fear of attack, sexual assault, all sorts of things. That’s why we’re marching on Saturday.”

Check out this excellent gallery of photos from Saturday’s march! See below for some excerpts from the dynamic speeches that our members gave!

Please note: This article was originally published on Picture the Homeless’ website on 8 March 2016. Click here to be redirected to the original article.