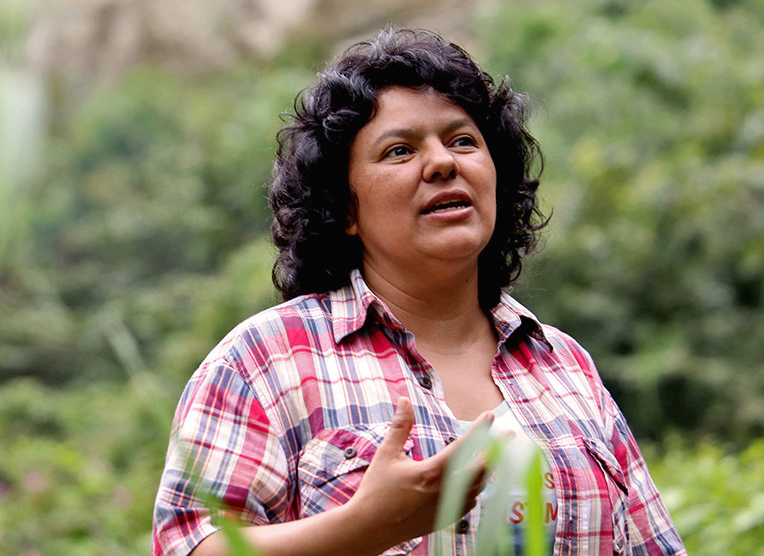 We are deeply saddened and shocked by the murder of Berta Cáceres, a leading indigenous land rights defender in Honduras.

On 3 March 2016, at approximately midnight, Berta Cáceres, the General Coordinator of Fund grantee Consejo Cívico de Organizaciones Populares e Indígenas de Honduras (Civic Council of Popular and Indigenous Organizations of Honduras – COPINH), was assassinated in her hometown of La Esperanza, Intibuca. At least two individuals broke down the door of the house where Berta was staying for the evening in the Residencial La Líbano, shot and killed her.

Berta spent her life fighting in defense of indigenous land rights. In 1993 she co-founded Consejo Cívico de Organizaciones Indígenas Populares – COPINH (Civic Council of Popular Indigenous Organisations), which spearheads community-led campaigns against megaprojects that violated the land and environmental rights of local communities throughout Honduras. As a result of COPINH’s efforts to uphold the rights of indigenous people and the environment, the group faced a series of threats and repression, and Berta personally received countless threats of death, rape, and physical violence due to her activism.

“I believe that through all of this we have learned to fight through joy, event though it gets very hard and painful. We must know that we don’t have a backup planet, we only have the one.” – Berta Cáceres

In spite of such risks, for nearly 25 years, Berta and COPINH led several land struggles throughout western Honduras. In 2015, Berta won the Goldman Environmental Prize, the world’s leading environmental award, for her resilience and courage. In awarding the prize, the Goldman Prize committee said, “In a country with growing socioeconomic inequality and human rights violations, Berta Cáceres rallied the indigenous Lenca people of Honduras and waged a grassroots campaign that successfully pressured the world’s largest dam builder to pull out of the Agua Zarca Dam.”

In a recent statement, COPINH, said:

“In the last few weeks, violence and repression towards Berta, COPINH, and the communities they support, had escalated. In Rio Blanco on February 20th, Berta, COPINH, and the community of Rio Blanco faced threats and repression as they carried out a peaceful action to protect the River Gualcarque against the construction of a hydroelectric dam by the internationally-financed Honduran company DESA. As a result of COPINH’s work supporting the Rio Blanco struggle, Berta had received countless threats against her life and was granted precautionary measures by the InterAmerican Commission for Human Rights. On February 25th, another Lenca community supported by COPINH in Guise, Intibuca was violently evicted and destroyed.”

Berta’s death will have a profound impact on the many Lenca communities that she supported, COPINH, the Honduran social movement, and all who knew her. As Tatiana Cordero, Executive Director for Urgent Action Fund – Latin America, stated:

“We supported and worked closely with Berta. We are deeply moved and saddened by her loss, and are supporting COPINH, as well as the organization of WHRDs of Honduras and in Central America to strategize in demanding for truth and justice in this case. We honor and appreciate Berta’s struggle and spirit.”

In response to her murder, Urgent Action Fund – Latin America and other women’s funds in the Central America region are working closely to ensure the immediate safety of Berta’s family, colleagues, and community, and to bring her perpetrators to justice. Click here to read their full statement.

Urgent Action Fund stands firmly with women and indigenous communities, in Honduras and around the world, in demanding a thorough and immediate investigation of the circumstances surrounding Berta’s death.