Discovering Space for All of Our Voices: Reflections from the AWID Forum 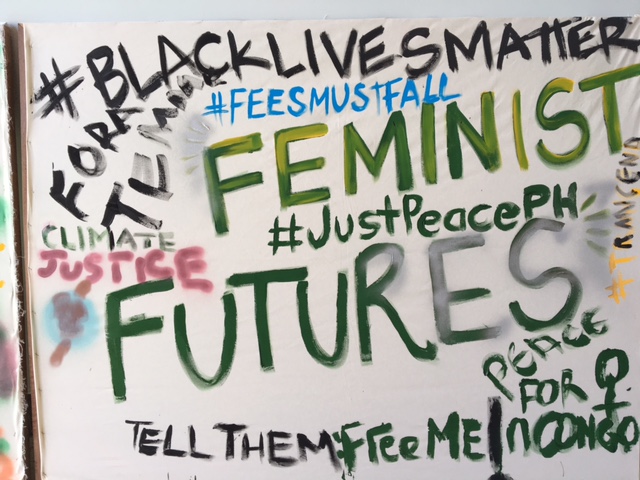 Photo taken at the AWID Forum in Brazil.

During the AWID Forum, in Brazil this September, Urgent Action Fund collaborated with a team of UC Berkeley Law Students and faculty from the International Human Rights Law Clinic to speak with our grantee partners and advisors about their experiences of the closing space and increasing restrictions on women human rights defenders. For these students, this was their first time attending a women’s rights conference such as AWID, and as intelligent and passionate future human rights lawyers, the experience had a profound impact on them. The following blog is the personal reflections shared by two of the law students who attended the Forum. In reading them, they remind me that AWID is not only critical for people in the movement now, but can be transformative for those who will hopefully be part of shaping and supporting the movement in the future. And when we think about Feminist Futures, that’s what we want….transformation.

No one could leave AWID without an appreciation for the diversity of experiences elicited by the simple question: What does it mean to be a woman? From Ghanaian women dressed in Kente to Egyptian women with earrings reading ash-shab yurid isqat an-nizam (“the people want the fall of the regime”), diversity could be seen and heard everywhere at AWID.

Such a space is powerful and inspiring. As law students, we entered AWID with our own identities, value systems, and areas of ignorance. Some experiences and conversations felt foreign and pushed us outside of our comfort zones. But it was important and not entirely surprising that we, the authors, had these moments, given our own diversity. Angela Donkor, a second year law student at UC Berkeley School of Law, was born in Ghana but grew up primarily in Italy, later moving to the United States at the age of sixteen. She has travelled to and worked in a variety of countries, assisting NGOs with their important work and educating herself about different cultures and social issues. She hopes to use her legal education to promote inclusion and acceptance of all people. JA is a third year law student of Palestinian and Irish descent at UC Berkeley School—roots that she recognizes as the epitome of modern-day colonialism. Her passion for Palestinian rights developed while she finished primary school in the Middle East, and grew during her undergraduate program when study of Irish history helped her to realize that her identity struggles were inherently intertwined. She hopes to use her legal education to advocate for the Palestinian right to self-determination, and one day, the establishment of an independent state that is no longer plagued by the ills of a 68-year military occupation.

This year, the debate over gender neutral bathrooms has generated strong feelings on both sides of the discussion. Proponents have argued that people ought to be free to use any bathrooms they want, that forcing people to use the bathroom of the gender they were assigned at birth fails to recognize their humanity. Opponents have argued safety concerns, chiefly that would be sexual predators might use gender neutral bathrooms as an opportunity to harm women and girls. In the United States, conservative towns have begun to pass laws forcing people to use the bathroom associated with their gender at birth.

To be honest, I was not sure which side of this debate I stood on. I am not even sure that, prior to the AWID conference, I had given much thought to the issue of gender neutral bathrooms. Perhaps I thought that my opinion did not matter, or that whatever I had to say about the issue would not make a real difference, considering how divisive the conversation had been. Then, I found myself in Bahia, Brazil at the AWID conference this year. In the lead-up to the conference, the organizers hosted a webinar in which they mentioned that there would be gender neutral bathrooms. As someone who has grown up using the same bathroom as people of my gender, I had gotten comfortable with the idea of knowing who was using the bathroom next to me. At first, it was hard to use the gender neutral bathrooms. I was scared about what my reaction would be and afraid that, if I reacted badly, I would make another person feel truly uncomfortable. However, on day two of the conference, I decided to give the bathrooms a try. I went in and did my usual routine. I did not feel uncomfortable, but that was because as soon as I walked in, it was clear that everyone in the bathroom was a woman. I told myself I had done it; I had used a gender neutral bathroom, but I had not. I felt like I had cheated myself of the experience because I had not confronted the “other,” I had not come face-to-face with someone with whom I typically would not expect to share the same bathroom.

On day three, I decided to use the gender neutral bathrooms again. This time, when I walked in, there was a man and a transgender woman washing their hands. I proceeded to use the restroom, but if I am honest, I was scared. I was scared that they had read the fear in my eyes as I walked in; I was scared that I had made them uncomfortable. So I took longer than usual in the bathroom, waiting to see if they would leave. Then, I opened the door and came out, washing my hands right next to them. I walked out and nothing had happened.

In retrospect, it was as normal a bathroom experience as the countless ones I had had before that day. What made it different was that I have grown-up in a world in which we are afraid of the other. I have grown-up in a culture that says men and women use different bathrooms. What was remarkable about what I learned that day is that we live in a world in which we have made the rules ourselves. And what is empowering about that is our ability to change the rules at any time and to be more inclusive—just what the gender neutral bathrooms aim to achieve. They force us to change the self-imposed rules in recognition of the humanity of others.

For the first time in my life, at AWID, I was in a space where people understood and respected my Palestinian identity and struggles. Throughout my life, women’s rights in Palestine have always been framed by both the patriarchal nature of Arab society and the role of Islamic fundamentalism. The activists that I have met in the global north continuously failed to recognize that Palestinian women cannot be “free” as long as they live under occupation, constant human rights abuses, and apartheid. Conversely, AWID created a space for dialogue on the intersection of issues that both Palestinian women and men face under military occupation. It also created a space for the intersection of struggles between women from conflict areas. I felt like I could wear my Palestinian identity as a badge of honor at AWID, rather than having to hide it as I have been trained to do by Western society. The sense of relief and clarity that I got from this experience left me thinking about issues that, quite honestly, I gave up on long ago.

Every time I discussed Palestinian rights with friends or family (usually fellow Arabs), someone always mentioned how the other countries in the Middle East never stand up for Palestinian rights. If we Arabs cannot stand together, then why should others stand with us in our fight against ISIS, the pursuit of democracy, etc.? I had asked myself this question on many occasions with no real answer. It was not until I attended the AWID conference that I realized that reliance on states with varying political and financial interests would never yield solidarity for our shared struggles. Instead, reliance on transnational movements and civil society organizations could become a great source of cross-border cooperation and solidarity.

This revitalized train of thought stemmed from a workshop that I attended at AWID on the establishment of a women’s human rights defenders coalition in the Middle East and North Africa. The workshop helped me to appreciate the viability of a cross-movement response to combating the similar injustices faced by all Middle Eastern people. A regional coalition is a great tool for activists throughout the Middle East to reconceptualize their strategies in light of each other’s experiences. Such coalitions can strengthen local movements and lead to concrete change. These coalitions recognize that feminism in the Middle East includes not only the right to drive or own land in Saudi Arabia, but also the right to live free from dire poverty or bombing campaigns in Yemen. Coalitions foster the essential idea that none of us are free until we are all free. With this in mind, it was also inspiring to see Palestinian self-determination framed not only as a Palestinian struggle, but also as a regional, and most importantly, a feminist struggle; one that was shared and understood by the many amazing women that I was fortunate enough to cross paths with during my time in Bahia.

When I sat on the terrace of one of the hotels on my first night at AWID, I spoke with a group of women from Algeria. The second they found out that I was Palestinian, they began to tell me stories of their own activism in support of Palestine, and how Algeria could never be free and at peace until the Palestinians were too. We spoke for hours about our shared hardships. I also met a woman from the northeast of India who lived under conditions of constant, heavily armed conflict. She talked about the Israeli role in fueling the conflict in her region and sympathized with my internal battle to remain active in an era replete with power-politics and western ideologies that continue to minimize my peoples’ suffering. Through her own activism and her words, she encouraged me never to give up fighting for the freedom and equality of my people, despite my exhaustion.

After these encounters, I returned to Berkeley more committed than ever to my peoples’ struggle for self-determination and the global struggle for women’s liberation. As part of the Palestinian diaspora, I can never stop fighting for my freedom, my identity. With this reinvigorated commitment to learning more and actually taking steps toward change, I decided to finally visit Falasteen. This December, I will make the journey; a trip that I will surely never forget, just like my father before me can never forget being expelled and forbidden from returning to his home on June 7, 1967. The first Israeli prime minister, David Ben-Gurion, may have been right in one respect: the old will die, but he was mistaken in believing the young will forget. I most certainly will never forget.

In a world in which we are afraid of diverse viewpoints and in which we seek refuge among those who speak and act the same way as we do, our stories show that we can be different and still value that difference. Our stories are examples of two future lawyers navigating a world in which we are seen as profoundly different and told that there is no way we can coexist together. A world in which we are told that we cannot all speak at the same time and have a voice, because one of our voices might take over that of the other. We reject these views because we believe that there is enough space in the feminist world for all of our voices to be heard and for all our experiences to be valued.