Our resist and reclaim fund for US activism is here to stay: an update post inauguration 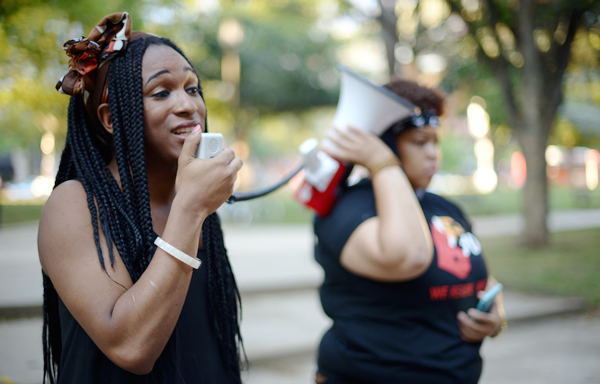 The morning of November 9, 2016, Urgent Action Fund launched Resist and Reclaim: an Emergency Fund for Women and LGBTQI Activists in the United States. To those who gave to this fund — thank you. As of January 20, 2017 your gifts had already enabled us to provide five rapid response grants to women and trans activists working on pressing human rights issues here in the US.

Two of the five grants met immediate security or relocation needs for LGBTQ people of color organizations. In each case, their offices were vandalized, broken into, and staff members were stalked online by hate groups energized by the US election results. Surprisingly, these organizations were located in California and Washington  — states typically assumed to be more progressive.

Two further grants, provided in California and Louisiana, helped groups prepare strategies to combat racist or xenophobic policies. In California, we supported legal aid to domestic workers facing an increased likelihood of deportation and separation from their children under a new administration. In Louisiana, we supported a women of color-led non-profit working with youth in New Orleans, teaching them leadership skills as they prepare for funding cuts and face an uptick in racism.

And, one rapid advocacy grant supported urgent action by an indigenous women’s water protectors organization before their victory over the corporate interest of Energy Transfer Partners. An uplifting story at the end of 2016 that we were certainly proud to be a part of.

We have been quietly and diligently working to make a difference with the funds entrusted to us, making 173 rapid response grants to other women’s movements across the globe in 2016. Given this global moment, we think it is time for us to raise our voices a little louder.

As of July 2017,  we have raised $175,000 towards our $250,000 goal for the Resist & Reclaim fund, which would provide grantmaking resources designated specifically for US human rights work.

UAF’s grantmaking within the US has more than doubled over the past two years. In total, we provided 16 rapid response grants to activists in the United States in 2016. For the first time in UAF’s decades-long history of grantmaking in the US, this included funding multiple urgent security grants. Prior to 2016, security-related requests from activists in the United States to Urgent Action Fund were extremely rare.

In fact, over nearly two decades of work in the US, from 1999-2015, while UAF made 70 rapid grants within the US, just six of these were related to security concerns, the rest supported rapid advocacy opportunities. In 2016 alone, the number of rapid security requests from activists in the US to UAF increased by 300%.

Over 95% of our US grants have gone to initiatives led by people of color because our lens has always been that feminist and women’s rights activism cannot be separated from the struggle for racial justice and the effort to dismantle systems that privilege white people in the United States.

We can all do more. At Urgent Action Fund, we are heartbroken by the hateful rhetoric and violence and note that those most threatened are those already most marginalized within the US – particularly Black trans* women and Muslim women.

There is a pressing need for support of women’s and LGBTQ organizing in the US and for all of us to speak up.The days of being quiet are gone.

We hope you will continue to stand with us in the coming months.

ACTIVISTS: If you are in danger, please note that our grant application is secure and 100% online. You can access it here.

DONOR ACTIVISTS: If you would like to mobilize your voice within this current movement, donate to Urgent Action Fund and provide a rapid response grant for women and LGBTQ activists. They will receive the funding within 24-72 hours of the request.