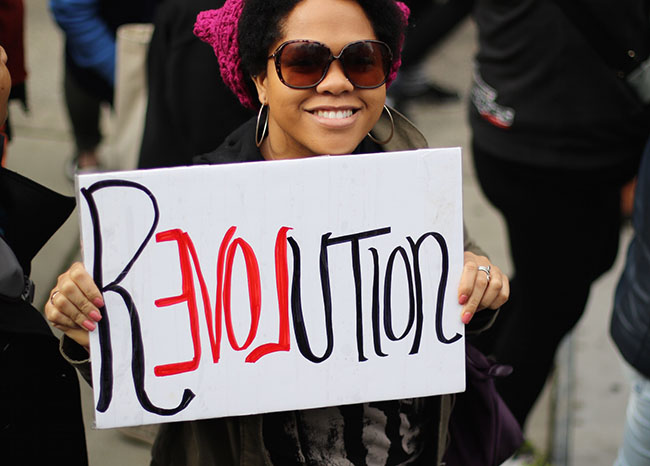 Photojournalist, writer, and founder of Changing the Narrative, Rucha Chitnis, has written an inspiring essay in lieu of International Women’s Day. She bravely posits why defending human rights work is women’s work and names the collectives of women doing human rights work in the US. Variations of her essay have been printed in YES! Magazine and Truthout. Read her full essay below.

Joye Braun recalls setting up her tipi in snow last April at the Standing Rock Sioux Reservation. The camp founded by LaDonna Brave Bull Allard, a beloved elder Native woman, was named Iŋyaŋ Wakháŋagapi Othí, meaning Sacred Stone, which is the pre-Colonial name of the Cannonball River area. “Before colonization, women were traditionally equal to men in our society. What we have seen at Standing Rock is extraordinary—women reclaiming their rightful, sacred place in our community. We know our voices matter and our opinions have value, and it’s been powerful for both—men and women—to witness this,” said Braun. 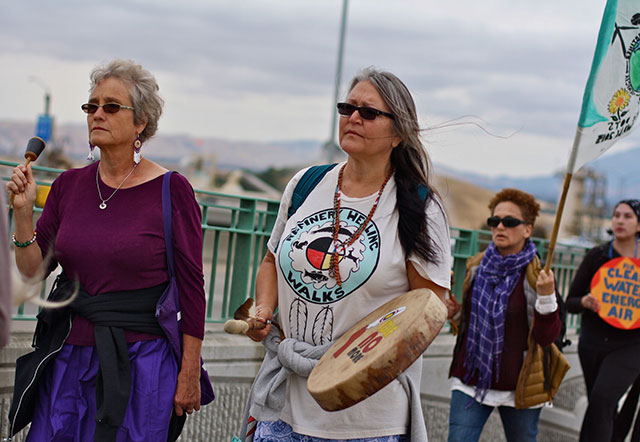 The camps on Sioux treaty land are gone now. Last month, militarized police and bulldozers cleared them out. But the legacy of women-led resistance remains as women across the country make themselves central to protecting human rights and defending the environment.

“Women are inseparable from human rights defenders,” said Patricia Viseur Sellers, the special adviser on international criminal law prosecution strategies for the International Criminal Court. “We need to recognize women human rights defenders in the U.S. as well [as the rest of the world], because they are doing the honorable work of advancing democracy that affects the majority of Americans—whether it is our ability to have clean air and water, a living wage, healthy food, or education. In this humanity comes our strength,” she said.

While the U.S. has branded itself as a model of human rights, it has been criticized for dropping the ball on advancing women’s rights at home and overseas. While 187 countries have ratified the United Nations’ Convention on the Elimination of All Forms of Discrimination Against Women, the U.S., along with Somalia and Iran, has refrained. “On one hand it is egregious and shameful, but the U.S. couldn’t pass the Equal Rights Amendment for men and women to have equal rights under the U.S. constitution and that puts things in perspective,” Sellers said.

Shalini Eddens is the director of programs for Urgent Action Fund for Women’s Human Rights, an Oakland-based group that makes rapid-response grants to women human rights defenders facing imminent threats. Eddens said the group has seen a palpable increase in grant requests from the U.S., where attacks are racialized and gendered in nature. “After the election results, we saw an increase in requests from LBTQI groups and gender-nonconforming activists in the U.S., who are experiencing severe threats for the work that they do. We are receiving requests to install security cameras in offices, which are requests we see from grantees in Eastern Europe or South Asia. This mirrors the experiences of women from repressive and conservative governments,” she said.

“We recognize our moral and ethical responsibility to support women and transgender human rights.”

On the morning of Nov. 9, Urgent Action Fund launched the “Resist and Reclaim Fund” to strengthen the resiliency of women human rights defenders in the U.S. “As a U.S.-based funder, we recognize our moral and ethical responsibility to support women and transgender human rights activists in the country where we are based. We are responding to the intersectionality of how women and social movements are connecting. It is important to celebrate these women who are building a more peaceful world that is open, just, and filled with love,” said Eddens.

In the wave of rising global fundamentalism and populism, the UN Human Rights Office of the High Commissioner made a call for all states to protect women human rights defenders. “The U.S. is a part of the international community. No man is an island. Many international legal protections that the UN tries to promote also apply to us, and these are the values that are necessary for a democracy,” Sellers said.

Here are four groups led by women and trans women human rights defenders whose work is rooted in the intersection of race, gender, immigration, religion, and sexuality.

#EveryBlackGirl began as response to a shocking viral video where a white police officer was taped dragging and slamming a black girl to the floor in her classroom in South Carolina. Niya Kenny, another black student in the class who taped the incident, protested and was arrested along with her classmate who was assaulted.

“This brought out deeper issues about gender and race. When black girls are assaulted, somehow it becomes the fault of the child,” said Vivian Anderson, a member of the New York City chapter of Black Lives Matter. Anderson partnered with the American Civil Liberties Union to file a federal lawsuit challenging a law in South Carolina that makes it a criminal offense to disrupt students or teachers in a school. According to a press release by the ACLU, “black students are nearly four times as likely to be targeted.”

Anderson founded #EveryBlackGirl to raise awareness on issues affecting black girls and center them as agents of change. “We want to create a world where black girls can thrive and are seen as human beings who deserve support and dignity,” Anderson said. Over the past couple of years, she and her team have organized workshops in schools, and gathered with hundreds of community members in town halls and hosted healing circles for black girls and women.

Texas Muslim Women’s Foundation (TMWF) was founded as a response to counter negative perceptions and stereotypes confronting Arab and Muslim communities in the U.S. after 9/11. “There were so many misconceptions about Islam and the role of women within Islam. We began to have interfaith dialogues with Muslim, Christian, and Jewish women to build understanding with sisters of other faiths,” said Hind Jarrah, executive director of TMWF. After consulting with Muslim women in their communities, TMWF saw a need to offer services to survivors of domestic violence. One of their trailblazing milestones was uniting Imams, the prayer leaders in mosques, in North Texas to sign a zero-tolerance pledge against domestic violence.

“If we don’t defend each other, we will all suffer.”

“This was a big achievement for us. We had Friday sermons in the mosque to dialogue on domestic violence, and our youth also signed the pledge,” Jarrah said. TMWF’s Peace in the Home program has offered services to over 1,500 survivors of family violence.

Since the election of Donald Trump, hate crimes against Muslim communities have surged. “Children in school are being called terrorists. Women wearing hijabs are being targeted. This is a scary time for us,” said Jarrah. She has also observed a drop in the number of domestic violence clients seeking services because of fear of deportation. In the midst of this turbulence, TMWF is prioritizing building solidarity with other minority groups that are marginalized and are advocating for refugees. “Our interfaith dialogues have been meaningful for us to connect with other sisters. My hope is for us all to persist through this time with a series of thoughtful actions and deepen connections. If we don’t defend each other, we will all suffer,” Jarrah said.

TGI Justice Project advocates for the rights and dignity of transgender, gender variant, and intersex people who are inside and outside of prisons, jails, and detention centers. TGI Justice Project grew under the leadership of iconic black trans activist Miss Major, who was at the historic Stonewall uprising in 1969 in New York City, considered as the beginning of mainstream LGBT rights in the U.S. TGI Justice Project is led by those with lived experience in the criminal justice system.

“It’s very dehumanizing when people tell you who you are and who you are not,” said Janetta Johnson, executive director of TGI Justice Project. Johnson, a black trans woman, was formerly incarcerated in a male prison, where she was sexually assaulted.

“I want to make it clear that the criminal justice system created this trauma for me. They tried to strip away everything from me in the prison. Thank God the biggest part of my trans experience was inside of me,” said Johnson.

TGI Justice Project offers a reentry leadership program for trans women who are out of the prison system. This includes providing a safe, family-like environment, trauma support, and advice to navigate name and gender documentation. “Every woman should get to decide what womanhood is for her. We need to look at how we devalue people just because of their appearance. This hurts all women,” said Johnson.

Johnson believes it is important for cities in the U.S. to have a trans district, which can act as a cultural center for trans people to find a safe space and community. “Trans women have suffered such BS since Stonewall,” she said. “Black trans women and trans women of color have not received the rightful recognition for our work. We are now asking [people] to invest in a community that hasn’t been invested in.”

Mujeres en Accion (Women in Action) is a program of Instituto de Educacion Popular del Sur de California (IDEPSCA), which works with “household workers,” a term the group prefers to use for domestic workers. “We work at the intersection of immigration and labor violations. There is a devaluation of women’s work, whether it is care work or cleaning homes. Household workers from immigrant communities also face sexual harassment and wage thefts,” said Maegan Ortiz, executive director of IDEPSCA.

According to IDEPSCA, workers in Los Angeles lose $26.2 million in wage theft violations every week. To address this, Mujeres en Accion partnered with the California Domestic Workers Coalition and other labor groups to advocate for a worker-led bill of rights. Their collective mobilization led to securing overtime protections for household workers, who were historically left out of labor laws.

“There is a devaluation of women’s work, whether it is care work or cleaning homes.”

In the face of increasing threats of deportation under the Trump administration, Mujeres en Accion is offering legal consultations and guardianship clinics to migrant worker communities. Ortiz said that migrant workers are afraid for their future, and families are scrambling to make plans for their children if one or both parents are deported.

When asked why women human rights defenders need to be celebrated in America, Ortiz said: “Because we have always been defending human rights, whether we got the credit or not. I am seeing women of color live their lives on intersections. Here we are—thinkers, leaders, artists, caregivers—coming from such multifaceted, intersectional spaces. My hope is we can work deeply and move from transactional organizing to relational organizing. This is the only way we can build trust and community.” 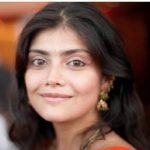 Rucha’s stories and photo essays have been published in Pacific Standard, National Geographic, Public Radio International, YES! Magazine, and Truthout, among other places. Read more of her work at Changing the Narrative or follow her on Twitter @RuchaChitnis.