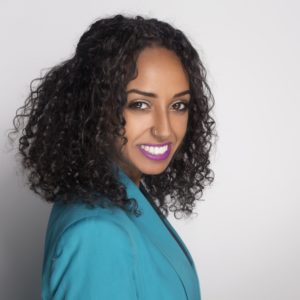 Mahie identifies as a Black/Ethiopian-American revolutionary intersectional feminist fairy. She pays homage to her mother, grandmother, younger sister, two brothers, uncles, and family, as she gives thanks to them for being her inspiration and light and evoking her energy for transformative justice.

Through the creation of her own community organization, she raised funds and awareness to stem the tide of child brides in her home country Ethiopia and throughout the global south. Channeling creative resilience she took an active role in strategizing how to eliminate gender inequalities, end domestic violence and uphold reproductive justice for young girls and womxn. In San Diego, CA—on Kumeyaay Land—as a Coordinator with Alliance for African Assistance, she acted as an advocate for refugee/asylum seekers. In her time at the University of San Diego she worked as a Teaching Assistant with youth of color and as a Community Organizer tackling issues of racial injustice, institutional racism, environmental racism, the school to prison pipeline, with speaking up for immigrant rights and showcasing that migration is beautiful—especially in the context of cross border relations. Bringing the first Afrikan Union to her campus she cultivated a space for folks of the Afrikan diaspora (and allies) to come together and feel respected, valued and heard on campus and in the community.

Mahie studied International Relations and Ethnic Studies at the University of San Diego, and she is grateful to be a part of the UAF team and support the work of empowering human right’s defenders on a global scale dedicated to eradicating all forms of oppression and injustice. Basking in a radical realm of raised consciousness, she aspires to keep learning, listening, reigning resilient alongside black and brown queens sparking the revolution.

Please join us in welcoming Mahie to the team. She can be reached at mahie@urgentactionfund.org.