“Stand with Us!”: Activists Call Funders to Action 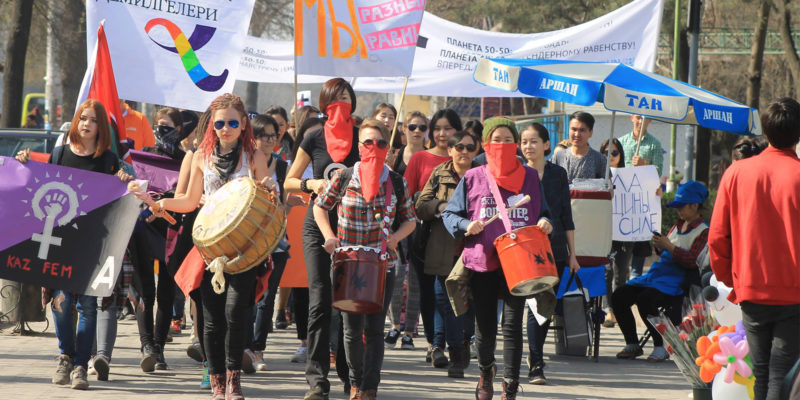 In communities globally, feminist groups led by women, girls, and trans and intersex[1] people are collectively organising to make the world more peaceful, democratic and fair. At the same time, a rise in fascist ideologies, authoritarianism, and populist agendas in many parts of the world threatens their work for justice. Repressive agendas put fundamental rights and freedoms at risk and promote nativism, xenophobia and increased surveillance in the name of national welfare and security. In this political environment, state-sanctioned violence is on the rise, targeting migrants, Muslim people, Black communities, women and gender nonconforming people, and other marginalised groups.

One of the key tactics of authoritarian governments is control of civil society organisations and spaces through increased repression and surveillance. In the past few years, concern in the philanthropic sector about “closing space” for civil society has increased, particularly because the movement of money to support civil society organisations is being monitored, controlled and often stopped by governments. Earlier this year, the EFC and FICS contributed to the philanthropic conversation by sharing a paper that addresses why closing space matters for development funders. The paper raised the important issues of growing political hostility towards human rights activists and the chilling effect this has on civil society’s voice. Mama Cash and Urgent Action Fund were also heartened that the paper recommended core, flexible funding and funding for security to keep civil society functioning and resilient.

Mama Cash and Urgent Action Fund support organisations of women, girls, and trans and intersex people whose issues and agendas have been pushed to the margins and are often ignored or deemed less important by mainstream civil society. Many of the organisations we support have faced repression for decades, and, in the current climate, they are often the first to be targets of violence, intimidation and silencing by repressive regimes.

The gendered impacts of “closing space”

In a context of much discussion and analysis, little consideration has been given to the gendered impacts of closing civil society space and to the voices of feminist activists sharing how their work is being affected. Women, girls, and trans and intersex people continue to organise in repressive conditions, and they have developed a wealth of creative tactics and strategies that can contribute to strengthening enabling environments for all members of civil society.

Moreover, when gendered impacts are ignored, strategies to respond to closing space will fail to take into account the types of violence and repression that feminist activists experience. Women, girls, and trans and intersex activists who are challenging patriarchal gender and sexuality norms have always experienced marginalisation. In the current climate of intensified hostility and repression, the research found that the use of sexualised violence to silence or intimidate activists is a virtually universal experience.

Mindful of the lessons that feminist activists have to share, and with generous support from the Levi Strauss Foundation, Mama Cash and Urgent Action Fund have collaborated on research to document the gendered impacts of closing space amongst our grantee-partners in China, Egypt, India, Russian Federation, Turkey and Uganda. Fifteen women- and trans-led feminist groups were interviewed, and the activists subsequently took part in a four-day convening to review and validate the research findings and to build digital security awareness and skills. Activists met with staff from the Dutch Ministry of Foreign Affairs to share their experiences of working in challenging contexts. The convening facilitated connections between activists and funders, built transnational solidarity, increased knowledge to sustain activism, and resulted in the report Standing Firm: Women- and Trans-Led Organisations Respond to Closing Space for Civil Society.

Challenging traditional gender norms and gender-based violence puts women, girls, and trans and intersex activists and organisations at risk, but activists are standing firm. In India, Dalit women’s rights groups are at the forefront of leading the fight against caste discrimination and violence. In Turkey, young feminists are using the internet as a platform to speak out against gender-based violence. Trans people in Russia; sex workers in Uganda; lesbians, bisexual women and trans people in China – all around the world, people who have been pushed to the margins are building community and developing strategies to resist violence from state and non-state actors. As funders, it is crucial that we support activists who are addressing these systemic gender inequalities.

The research produced a series of recommendations from activists with a clear message: it is crucial that donors continue funding in difficult contexts. Feminist activists expect continued stigmatisation and attacks. The existence of their organisations, as well as their personal security, is at risk. They highlighted the importance of core, long-term and flexible funding, as well as funding that allows them to adapt and respond to rapidly changing contexts.

Their recommendations also identified the need to adapt funding approaches to better support marginalised civil society actors, to develop partnerships with activists to support locally-driven change, and to share risks. Finally, they also highlighted the importance of resourcing networking and convening to create spaces for exchange, mutual support and movement building to counter the fragmentation of civil society that is a product of states’ ‘divide and rule’ strategies.

As feminist funders, we are committed to ensuring that the range of essential resources – from rapid response funding to longer-term, core support – continue to flow to organisations of women, girls, and trans and intersex people. As civil society space becomes more restricted, funders need to establish deep, long-term partnerships to strengthen civil society organisations, increase their impact and ensure their sustainability. While moving resources in restrictive contexts is not without risk, acting in solidarity as donors is imperative. As funders, we must develop and implement creative ways to ensure that civil society organisations on the frontlines are well resourced to continue the fight for a just and safe society.

[1] Trans people have a different gender identity or expression than the one assigned them at birth. Trans is a placeholder term for the broad range of trans identities including trans men, trans women and those who identify with a non-binary gender category or who are gender nonconforming. Intersex people are born with chromosomes, gonads or genitals that vary from female and male standards. Formerly a medical term, intersex has been reclaimed by intersex people as a personal and political identity.