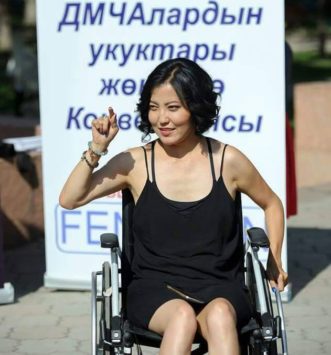 CONTEXT: Kyrgyzstan has not yet ratified the UN Convention on the Rights of Persons with Disabilities. And 175,000 people living with disabilities are struggling in poverty and 30,000 children with disabilities have no access to primary and secondary education. Basic physical accessibility and access to information is an urgent problem. Women and girls with disabilities face gender-based violence and are often isolated at home.

IMPACT: With a UAF rapid response grant, Nazik Kyz organized a march of 300 people from different parts of Kyrgyzstan, resulting in public support from government officials, including the Minister of Labor and Social Development, who committed to support ratifying the convention. The campaign continued after the march leading to broadened international support and increased visibility for people living
with disabilities.

“Why do I need the Convention on Disability Rights to finally be ratified after so many years? That is like asking why do I need to wear clothes? Why do I need to eat? The quality of my life should not be dependent on other people. I simply want to live an independent life according to my values, which my mother taught me.”