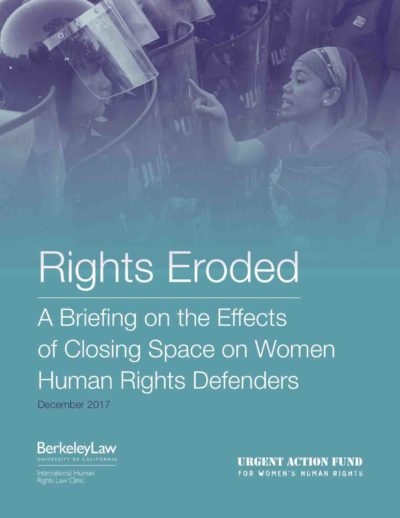 “Closing space” refers to a term used by human rights defenders to explain the diminishing freedom to practice their activism.

This may seem like a counterintuitive concept to some, as 2017 felt to many as a year of increased activism and unapologetic advocacy in the face of growing fundamentalist regimes around the world. But arguably it is the non-visible elements of our disappearing freedom that makes “closing space” so dangerous.

“Closing space” is an obscure phenomenon not because its effects are minimal, but because instead of visible forms of physical violence and intimidation, governments are using bureaucratic regulations to criminalize activism and restricting the effectiveness of women’s human rights movements in their greater advocacy for all peoples marginalized by traditional systems. And, simultaneously stripping women of their own human rights.

“But the problem is not only about administrative barriers, but also about stigmatizing and criminalizing the kinds of work [women are] involved in.”Katrina Natale, clinical teaching fellow with International Human Rights Law Clinic at UC Berkeley (IHRLC). There’s a great deal of hostility toward not just women human rights defenders (WHRDs), but also their families, who are often accused of crimes against national security. Penalties are high – including the death penalty.

“We often read about individual human rights struggles, but we wanted to pan back and show the emerging pattern in a larger context,” says Laurel E. Fletcher, clinical professor at Berkeley Law, the director of the IHRLC, and co-faculty director of the Miller Institute for Global Challenges and the Law. “Russia is trying to export its repressive laws throughout the region, and other large countries like China and India are imposing new restrictions, for example. It’s a global crisis and we wanted to shine a spotlight on this. The environment for human rights is on a downward trend – human rights activists are on the ropes.

“Russia is trying to export its repressive laws throughout the region, and other large countries like China and India are imposing new restrictions, for example. It’s a global crisis and we wanted to shine a spotlight on this.”

With the participation of the IHRLC, Rights Eroded offers a legal lens that adds teeth and deepens the conversation around the gendered aspect of closing space which may lead to greater impact and broader solutions.

“For more than 20 years, we’ve helped to support resilient feminist movements around the world,” Shalini Eddens, UAF Director of Programs says. “Our rapid-response grant-making program offers WHRDs immediate funding when opportunities or dangers suddenly arise. But incidents of closing space are becoming more blatant and outright, and the risks are becoming higher. Our goal is to hold these countries more accountable, and we’re hoping that our work with the IHRLC will accelerate that process.”

The second in a series, Rights Eroded makes a number of recommendations for states, donors, and the United Nations that would strengthen protections for WHRDs and their organizations and is the legal companion to Standing Firm: Women and Trans-Led Organizations Respond to Closing Space for Civil Society.

Standing Firm was created in collaboration with Mama Cash, and functions as a tool, resource, and larger testimony informing the understanding of how closing space, in all its forms, has a gendered impact.

Rights Eroded: A Briefing on the Effects of Closing Space on Women Human Rights Defenders