Shifting the Power: Women’s Voices at the Center of Global Justice Conversations 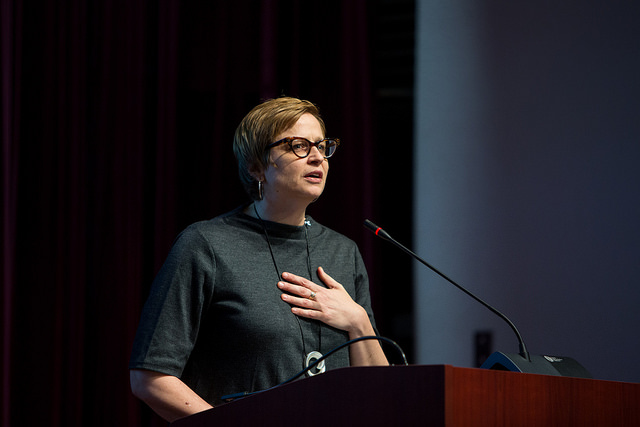 UPDATE: Access the full report on the outcomes of the Shifting the Power summit here.

“We are in a moment where it couldn’t be clearer that women’s voices, our leadership, and our experiences must be at the center of conversations around justice and equality. It is a moment that is framed in feminist terms, aimed at producing long-term structural change.”

Last month Urgent Action Fund Executive Director, Kate Kroeger, was the keynote speaker at Global Affairs Canada’s summit on Shifting the Power. Below is an adapted excerpt of her speech. Full remarks can be found on our blog.

“The moment we are in was most recently expressed by the simple and powerful phrase #MeToo. #MeToo began as a cri-du-coeur around sexual assault, and now it has caught fire and become a movement. And with that, it has spawned workplace conversations, new programs and interventions, and a renewed awareness of the very real experiences that hold women back from achieving our full potential. It has demonstrated that the courageous act of speaking out holds tremendous transformative power.

But that transformation, now underway, didn’t come from nowhere. In fact, women’s rights organizations have been working for years on sexual harassment and assault. So when #MeToo happened, they were ready to capitalize on the momentum. It was women’s rights organizations that shaped the messaging, raised awareness, and used the star power associated with #MeToo to mobilize resources for legal assistance programs for low-income women, among many other interventions.

And so too with women’s movements around the world. Day in, day out, women’s rights organizations work on the issues that define women’s lives: health, education, economic empowerment, freedom from violence. They build evidence, they advocate, they run programs at the community- and national-levels. And yet they do so with very little attention and very few resources, until their moment comes.

Recognizing this, the Canadian government has done something remarkable. Through the feminist international assistance policy, it has made a bold commitment to move money to these organizations, recognizing the critical work they do. Recognizing, in fact, that without resourcing women’s rights, lasting progress will remain out of reach for many communities around the world.

Last year’s commitment of $650 million for reproductive health programs and the launch of the Women’s Voice and Leadership program represent exactly the right political commitment at exactly the right time. As a Canadian, I can’t tell you how proud these announcements have made me. At Urgent Action Fund, on a daily basis, I hear from women who are responding to rights violations in the US and around the world, often in an environment where the government itself is responsible for those harms. So I am acutely aware that Canada’s leadership at this particular moment is critical.

Supporting women’s movements means getting the resources as close to the grassroots as possible. I realize this seems incredibly obvious, but you would be surprised at how little funding actually gets that far. As Melinda Gates recently pointed out in TIME magazine, women’s rights organizations receive only 2% of global gender funding. Two percent. And herein lies the disconnect. Our goals are transformational but too often they don’t actually translate into new ways of working.

As the inimitable Theo Sowa of the African Women’s Development Fund has said, ‘How do we expect to see real change in women’s lives when women’s rights organizations aren’t getting any money?'”

Read Kate’s full remarks to the Canadian government and her four suggestions to better resource and maximize the impact of grassroots women’s rights organizations.

The event was hosted by Global Affairs Canada and organized by Nobel Women’s Initiative and the Match International Women’s Fund.