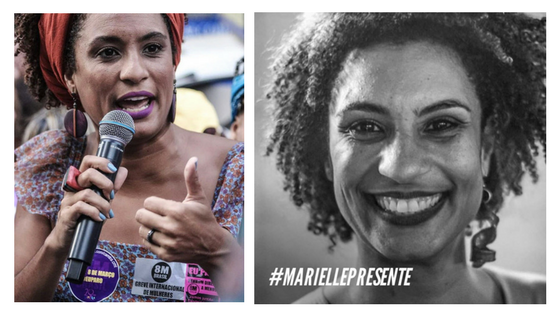 May she rest in power.

It’s with somber hearts that we reach out to you as joint Sister Funds today, in solidarity with the thousands of people gathered in the streets of Brazil, across Latin America, and the world honoring the life of Marielle Franco.Marielle was a well-known Brazilian activist and councilwoman fighting for the rights of Afro-Brazilians and was critical of the militarization in the favelas.

She was murdered in Rio de Janeiro’s city center Wednesday night after participating in the debate Black Women Moving Structures. We support our sisters at Urgent Action Fund Latin America in their assertion that Marielle’s murder is both a femicide and politically motivated assassination due to her extensive work in the defense of black women and those who inhabit favelas and the peripheries, in addition to her work denouncing police violence.

“Marielle’s assassination attempted to silence an Afro-Brazilian human rights defender. She spoke, fiercely, about the truth of her constituency in Rio de Janeiro, the brave citizens whose homes and streets reside under the control of the military police. Now these citizens have taken to their streets, proclaiming her voice and their rights.”

Two weeks ago, Marielle was elected Rapporteur of the Commission to Investigate the Militarization of Security in Rio de Janeiro, which has the task of reviewing the federal intervention approved by President Michel Temer in January, granting full control of the State Security Forces to the Army, something that has already been criticized by other NGOs, OHCHR, and IACHR.

We join our voices to those of the Feminist, Black, and LBTQI movements, to demand justice and to express our solidarity with all these people and our sisters at  Fund- Elas, the Women’s Foundation of Brazil. We demand an immediate, independent, and rigorous investigation so that Marielle’s assassination does not remain in impunity and justice is achieved.

Urgent Action Fund Board Chair, Patricia Sellers has also been in conversation with Agnes Callamand, United Nation’s Special Rapporteur on Extra-Judicial and Arbitrary Killings, about Marielle’s assassination at the United Nations Commission on the Status of Women in New York City this week.

The Urgent Action Funds remain determined to defend human rights defenders and to honor and respect Marielle’s legacy – today and all the tomorrows.

We echo Marielle’s own reflection, who had written on her social networks the day prior to her death, “how many more must die for this war to end.”