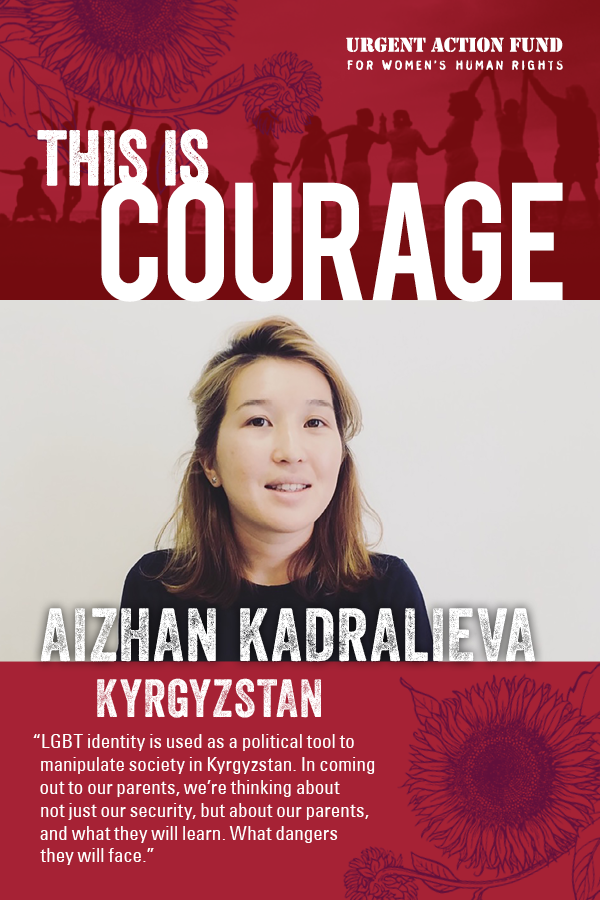 ACTIVISTS: Labrys, a grassroots platform for the advancement and protection of the human rights of LGBTQI people in Kyrgyzstan and Central Asia, engage a variety of advocacy tools through a network of intergenerational activists. Aizhan, a young, queer activist, is their Advocacy and Education Program Coordinator.

CONTEXT: Because there is a growing trend of violent state and non-state backlash on LGBTQI activists in former Soviet states, human rights defenders are increasingly relying on their online presence to continue their activism. However, not all details are safe to share online, especially in heavily censored states, and the depths of healing needed to sustain activism long term does not often happen in isolated digital spaces.

IMPACT: In partnership with Astraea Lesbian Foundation for Justice, Urgent Action Fund supported 20 trans, gender non-conforming, and queer activists from Central Asia, South Caucasus, Ukraine, and Russia, including Aizhan, to convene in person to discuss digital security and solidarity. Coming from very large and geographically diverse spaces that are often excluded from international development discussions, the participants built on their commonalities to build resiliency. Since the convening, Aizhan and their colleagues are building the first-of-its-kind secure digital platform for activists from the region.

Learn more about the convening, digital activism, queerness, and collaboration in Central Asia and Eastern Europe. Queer feminist consultant, Angelika Arutyunova, facilitated the meeting and is also from the region. Read her reflections on what was so unique about this convening’s particular methodology.